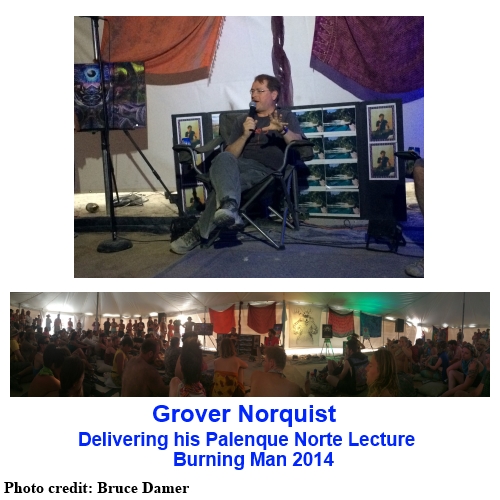 The final speaker at the 2014 Palenque Norte Lectures, which are held at Burning Man each year, was Grover Norquist. According to Wikipedia, “… he is an American political advocate who is founder and president of Americans for Tax Reform, an organization that opposes all tax increases and a co-founder of the Islamic Free Market Institute. A libertarian-leaning Republican, he is the primary promoter of the Taxpayer Protection Pledge.” While to those who haven’t yet had an opportunity to attend Burning Man, his attendance at such an event may seem unlikely, in the extensive Q&A that followed his brief talk, it is quite evident that he has many admirers on the playa. I think that you will be fascinated as he very candidly discusses not just tax matters but also touches on what he thinks about Burning Man itself, as well as his position regarding psychedelics, legalizing cannabis, and mandatory minimum sentencing.