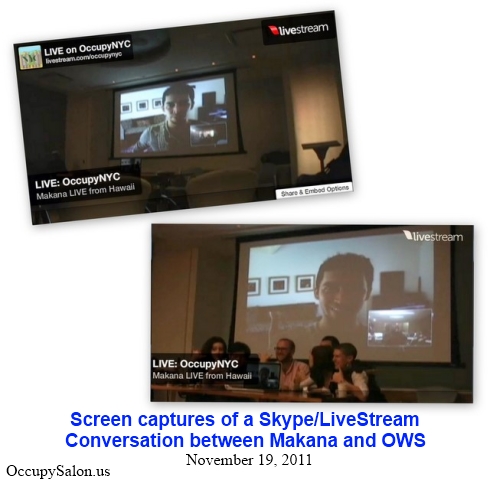 [NOTE: All quotations are by Makana.]

“This whole war that we’re fighting is a war of consciousness versus ignorance, of controlling human behavior by controlling people’s thoughts, by directing their awareness.”

“There’s always going to be disagreements as to what the solutions are, and even what the problem is, but if people in their own personal process start to face their own fear and let go of the prison that they are in, and that prison is the concern about what someone else thinks of them, if they get over that then they can be free. And then it’s up to them to facilitate the change they want to see. But we have to at least help them to get to that point, and that’s what I try to do with my music.”

“There are millions of people like me, who care about their future and will say something.”

“Aloha isn’t about representing yourself in a way that people will like you. Aloha is about valuing the well being of the other person, because you realize that you’re interconnected to them by the nature of life.”

“I know this sounds kind of silly, but for years I’ve been thinking to myself, it’s the musicians’ fault why things are so fucked up, because they have been programming people to not care for so many years now. And hopefully the musicians will start to not be afraid to say the things they really want to say, because music does something to you. It hits your emotions, and it goes right past that part of your brain that controls you.”

“When we can transcend this illusion that we are so different from each other, then we become powerful.”

“I feel that in the process of what we’re attempting to facilitate, to consider how people orient themselves to these issues is of utmost importance. Not just to present these issues, but to really know how to get inside and behind the barriers that have been put in place there by systems, an education system and a media that work to create an unthinking workforce, and people that don’t challenge authority and status quo. So I’m a big fan of understanding how nature works.”

ALSO SEE:
How I Stopped Worrying and Learned to Love the OWS Protests
by Matt Taibbi