The Missing Chapters of The Invisible Landscape
Chapter 20: The Oversoul as Saucer
Chapter 21: Open Ending

This is Tape Number 004 of the Paul Herbert Collection.

“In psilocybin and the tryptamine hallucinogens generally we actually have a state of mind that is very similar to the state of mind reported to accompany the UFO contact, and that these things could somehow be co-mapped, one onto the other”

“Involvement with these tryptamines as they accumulated in your system, you seem to acquire the ability to inhabit more than one world at once, as though superimposed over reality there was a super-reality, a hyper dimensional world where information was accessible in magical ways.”

“History is just this froth of artifact production that has appeared in the last ten to fifteen thousand years. It spread across the planet very quickly. But that mind in man just goes back and back into the darkness.”

“The extraterrestrial is the human over soul in its general and particulate expression on the planet. . . . The over soul is some kind of field that is generated by human beings, but that is not under the control of any institution, any government, and religion. It is actually the most intelligent thing on the planet, and it regulates human culture through the release of ideas out of eternity and into the continuum of history.”

“The myths that are building are like the Messianic myths that preceded the appearance of Christ.” 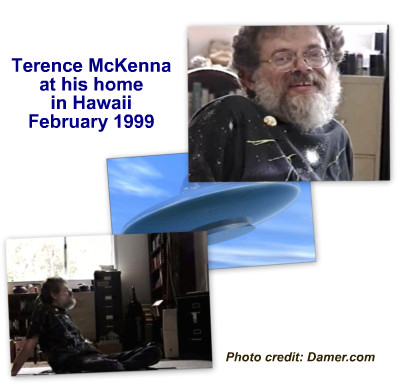 “The political conclusion to be drawn is to preserve your freedom of thought by deconditioning yourself to the flying saucer religion before it happens.”

“I think that the flying saucer experience is tremendously powerful. And that it really is somehow linked to the psychedelic experience in a way that perhaps will not be understood for some time.”

“Well, see what I’m saying is if we would intelligently examine these dimensions that the psychedelic drugs make available, we could as it were get in touch with the over soul and leave the era when man is disciplined by flying saucers and messiahs and progress is halted for millennia at a stretch just because people can’t evolve their ethics and their technology at the same rate of speed.”

“The modern epistemological methods are just not up to dealing with an elf, with chattering, elf-infested spaces. I mean, we have a word for those spaces, we call it schizophrenia and slam the door. But, you know, these dimensions have been with us since ten thousand times longer than Freud. And people just have to come to terms with them.”

“The discs which haunt the skys of Earth indicate that the unconscious cannot be kept waiting forever. These things are going to have to be dealt with.”

“The imagination is the golden pathway to everywhere.”

“But I think what’s being missed is that a whole dimension of communication is being ruled inadmissible as evidence simply because it doesn’t conform to the epistemological biases of the people who are asking the question. And that is all these voices in the head that guide shamans, that obsess lunatics, that make poetry, and in other words the muse. The muse is real. . . . Well one could talk endlessly about this subject, I suppose, but until it’s resolved all of man’s epistemological dealings with reality will be haunted by this faint spookiness, which can’t be gotten rid of.”

“You see what is happening and why the psychedelic experience is so important is because information is loose on Planet Three. Some kind of very strange thing is going on.”

“What is unusual about Earth is that language, literally, has become alive. It has infested matter. It is replicating and defining and building itself. And it is in us.””

“The over mind. The fact that there is a level of hierarchical control being exerted by the human species as a whole. That the destiny of man is not in the hands of governments and corporations and Communist Party apparatchiks. It is in the hands of a weirdly democratic, amebic-like, hyper-intelligent super organism, which is called Everybody.”

“And the reality of this informational creature is seen more clearly. It’s an organism. We are having a symbiotic relationship with an organism made of information. And this is what psychedelics reinforces, I think very strongly. It’s in the psychedelic dimension that you finally can key in to the voice of the organism and say, “Hey, what’s happening?” And then it explains to you that things are not as you took them to be at all. And that there is in fact layer, and layer, and layer upon interlocking meaning. And that there’s very little else other than that. And that the imagination is the true ground of being. And that there is a dimension, parallel to time, outside of time that is accessible to you as much as you want it, to the degree that you can decondition yourself from the history-bound cognitive systems that have carried you to that point. This is why it has always been said of psychedelics that they were sociological catalysts.”

“What it comes down to is trying to have faith that man is good, because what’s happening is that whatever man is, man is taking control of the definition of being human.”

“Death is both a historical and individual phenomenon about which we as monkeys have great anxiety. But what the psychedelic experience seems to be pointing out is that actually the reductionist view of death has missed the point, and that there is something more. It isn’t simple extinction. That the universe does not build up such complex forms as ourselves without conserving them in some astonishing and surprising way that is perhaps related some way to the intuitions that we have from the psychedelic experience.”