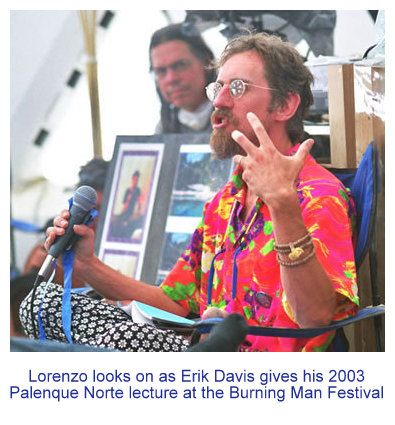 “But I did [as a child] spend a lot of time grappling with shit like the nature of the soul, and the nature of sin, and all of these imponderables. And, of course, what you end up doing is you end up reading scholars of mysticism.”

“To me it’s the most psychedelic part of the psychedelic experience, it’s when you get the logos coming out of the trees, the rocks, the berries, the water, everything.”

“[Speaking about how to pursue a psychedelic culture.] Well, I’d say the wrongly-packaged version would be something like ‘Castenadaism’, a formulaic cult. Do these things, take these drugs, follow these instructions and moral obligation will flee from your kin. Nobody can be that foolish. If, on the other hand, you sincerely pursue this stuff, grow the plants, try to understand it, try to revivify the rituals and figuring out what it’s all about, well, that’s an authentic push towards spirituality, a very authentic push towards spirituality, and probably fruitful.”

“It seems to me that ‘the shamanic drug of the month’ is not a very appealing idea.”

“The basic concept [of alchemy] is that somehow intuition and nature are reflective of each other. Until that hypothesis fails we should probably hang on to it, because look how far we’ve gotten. I mean it is really bizarre how much of nature the human mind seems to be able to understand.”

“[I’m hoping] that some lack of resource or vision doesn’t reveal that we can’t give enough people a bearable life. So we [would then] have to live forward into an age of revolution, social turmoil, and struggle for resources. It doesn’t have to be this way.”

“Now let’s see if information can liberate. That’s why I don’t want to do something stupid like die and miss the whole unfoldment of this proposition that knowledge is power, information will liberate. And it will be settled in the next ten or fifteen years. Either they’ll get a handle on it, whoever ‘they’ are, whatever a ‘handle means. Or it will slip from their control, and it will be clear that some kind of dialogue is now going on between individual human beings and the sum total of human knowledge, and that nothing can stop it, that some kind of Renaissance, some kind of total new relationship to knowledge and possibility is put in place.”

Terence McKenna Vs. the Black Hole by Erik Davis

This is Erik Davis‘ account of the interview heard in this podcast.

Excerpt: The following are excerpts from interviews that I conducted with Terence McKenna in late October and early November of 1999, in preparation for a profile that appeared in the May 2000 issue of Wired. These interviews have also been edited and released on a CD, Terence McKenna: The Last Interview. Given McKenna’s subsequent demise, I chose selections concerning his feelings about death and dying. The October interview was conducted in San Francisco just a few days before Terence underwent a craniotomy, and he therefore spoke a bit more frankly about his condition than during November, when I spent a week with him and his wonderful girlfriend Christie Silness during his sort-of recovery in Hawaii.