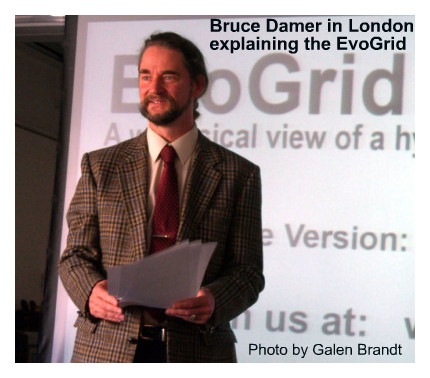 [NOTE: All quotations are by Bruce Damer.]

“I would say it’s no more than 500 people in the United States who cause a vast amount of the grief.”

“A crescendo involves everyone. The singularity seems to be this nerd idea of reaching some kind of Omega Point. It’s very much the Christian idea of the second coming. It’s apocalyptic, etc., a bit of a downer because everything comes to an end, but it’s incredibly unlikely.”

“So if we can’t do even one neuron [computer simulation] how are we going to upload consciousness exactly?”

“The virtual worlds and avatar spaces and multi-player games of now are the Keystone Cops of what virtual worlds will be in twenty or thirty years through AR [Augmented Reality], and big home holodecks, and stuff like that.”