NOTE: This program is still available at the

Lorenzo if you leave the Alan Watts materials up you will be sued before this month is out.

Lorenzo, my father’s talks are copyright protected. Please don’t post any more of his talks on your podcast and remove the ones you have in the archive.

If you want to listen to this talk you will have to pay his son for the privilege.  … Too bad, I thought information wants to be free. I wonder what Alan would say about this?

… although, if you Google “alan watts mp3 torrent” you can find thousands of Web sites that provide free downloads of Watts material.

Also, you will find many hours of free Alan Watts videos on YouTube. … So maybe it is only the Psychedelic Salon that Mark objects to. 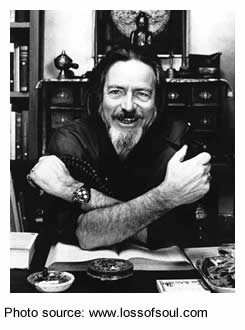 [NOTE: All quotations are by Alan Watts.]
“Western religions are more concerned with behavior, doctrine, and belief than with any transformation of the way in which we are aware of ourselves and our world.”
“And very often it seems to me that reality appears rather much as the world is seen on a bleak Monday morning.”
“Indeed one might say that psychoanalysis is based on Newtonian mechanics and in fact could be called psycho-hydraulics’s.”
“If therefore, the human race is to flourish we must take charge of evolution.”
“As Jung once suggested, life itself is a disease with a very poor prognosis. It lingers on for years and invariably ends with death.”
“When somebody speaks as an authority it means they speak as the author. That’s all it means.”
“All our images of ourselves are nothing more than caricatures. They contain no information for most of us on how we grow our brains, how we work our nerves, how we circulate our blood, how we secrete with our glands, and how we shape our bones. That isn’t contained in the sensation, or the image, we call the ego. So, obviously then, the ego is not myself.”
“And they [fruit flies] in their world think they’re as important and as civilized as we do in our world. So that if I was to wake up as a fruit fly I wouldn’t feel any different as it were when I do when I wake up as a human being. I would be used to it.”
“In fact, it’s a thoroughly good arrangement in this world that we don’t remember what it was before [we incarnated as a human]. Why? Because variety is the spice of life, and if we remembered, remembered, remembered, having done this again and again and again and again, we should get bored.”
“There comes a point when really, if we consider what is to our true liking, we will want to forget everything that has gone before so that we can have the extraordinary experience of seeing the world once again through the eyes of a baby, whatever kind of baby. So that it’s completely new, and we have all the startling wonder that a child has, all the vividness of perception, which we can’t have if we remember everything forever.”
“So death, in a sense, is a tremendous release from monotony. It puts an interval of total forgetting in a rhythmic process of on and off on and off so that you can begin all over again and never be bored.”
“The universe is really a system which keeps on surprising itself.”
“You can’t experience the feeling you call self unless it’s in contrast with a feeling of other. … Other is necessary for you to feel self.”
Download
MP3
PCs – Right click, select option
Macs – Ctrl-Click, select option