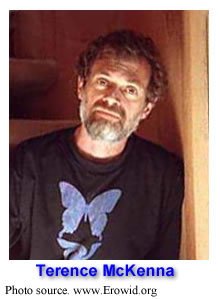 [NOTE: All quotations are by Terence McKenna.]
“The Dawning paradigm of post modern consciousness seems to be the growing awareness that we don’t know what is happening at all, that all of the models we have worked out over the past five hundred years or so have now become recursive, and they can no longer be pushed forward as models of explanation. In other words, they are completed.”
“There is not more blood to be squeezed from the stone of science.”
“Having seen the limitations of science, we have discovered we are in a small row boat in a dark ocean, and we are being swept we know not where.”
“Art is the ultimate expression of this transformation of unorganized matter into ideas which human beings carry on.”
“The Growing Transparency, that’s a good idea for what the end of history is. It’s that everything becomes clearer and clearer and clearer. And as it becomes clearer boundaries disintegrate, and everything is seen to be of the same stuff.”
“Life is a hyper dimensional object. All hyper dimensional objects are organisms, whether they be societies or animals.”
“There seems to be an informational ghost of this universe which is somehow co-present at all points within the matrix, perhaps al la Bell’s Theorem or something like that. And that’s what the psychedelic experience shows you. It shows you a hologramatic space of information, where by sitting still in your room and sending your mind you can cross the universe in an instant.”
“I’ve always thought that Christianity, without making any judgment about Christ himself, that Christianity is hands-down the single most reactionary force in human history.”
“I think that we are spiritualizing matter. This is what technology is.”