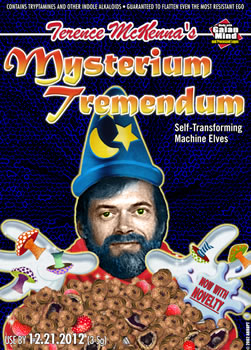 “Newton himself was a man with a foot in two worlds. He was a thorough-going occultist. His alchemical experiments and notebooks were voluminous. And yet he was one of the founding members of the Royal Society.”

“History itself is a kind of alchemical process. … History is the catalyst of nature.”

“If we could raise to consciousness our alchemical heritage, and our heritage in the shamanism of the archaic, then we could actually see that the purpose of technology is to liberate, not to enslave, and somehow we’ve lost the thread.”

“Capitalism, I can’t say this enough, is NOT in our interest.”

“The Earth is perfectly capable of raising outrageous hell without us triggering a nuclear war.”

“My faith is that we’re just slow to get rolling, and that once the battle is joined, once every person on Earth realizes that we’re in a battle for planetary survival, then people will get with the program, it’s just that things aren’t bad enough yet.”

“We’re lead by jackasses. We [the psychedelic community] don’t bother with our political processes.”

“What we have to do is stop looking for leadership from the top, because the least among us makes their way into those positions of power. I mean, you can see that now [1992], those guys are not fit to throw guts down to a bear … ANY OF THEM!”

“What we have to do is knock off this fantasy of being citizens inside a democratic state. I mean, what we are are the propagandized masses inside a Fascist dictatorship.”

“Know your enemy and they probably will not be your enemy.”

“I think that the Third Reich was a Sunday school picnic compared to the population policies of the Roman Catholic Church. … In a civilized political environment those people would be placed under immediate arrest.”

“The way to gain power is to reclaim a command of history.”

“The model of human nature which this society has deified makes it a pathological act, a sin, and a crime to alter your own consciousness. This doesn’t make any sense. We are at war with ourselves, and we’re losing.”