“It seems to me that it [Nature] is psyche in a way that has become occluded by the perverse development of language.”

“Standing outside the cultural hysteria the trend is fairly clear. It is a trend toward temporal compression and the emergence of ambiguity.” 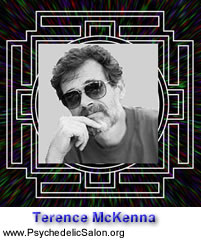 “Nature is actually the goal at the end of history.”

“And what we’re looking toward is a moment when the artificial language structures which bind us within the notion of ourselves are dissolved in the presence of the realization that we are a part of nature. And when that happens, the childhood of our species will pass away, and we will stand tremulously on the brink of really the first moment of coherent human civilization.”

“Only responsible human beings can exist in an anarchistic society.”

“Living psychedelically is trying to live in an atmosphere of continuous unfolding of understanding. So that every day you know more, and see into things with greater depth, than you did before.”

“Culture is another dimention.”

“The lack of a sense of history makes us really prey to manipulation.”