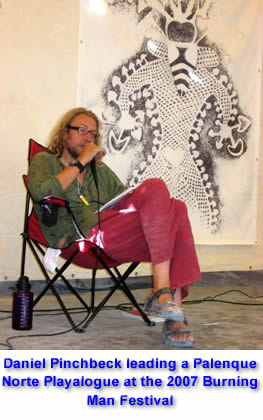 [NOTE: The following quotes are by Daniel Pinchbeck at the Playalogue he led on August 29, 2007 at the Burning Man Festival. This Playalogue was held in the big yurt at the PodCluster in Black Rock City.]

“I think there is a lot of evidence that suggests we’re in this kind of very critical sort of evolutionary window for the human species.”

“I really do feel that one of the critical things that is happening at Burning Man is a kind of conscious and subconscious interrogation of gender and sexuality.”

“What we have to consider is that if sexuality is this infinite spectrum, and everybody is highly unique in their sexuality, then to just have a social construct of monogamy is going to lead to a lot of anger, and frustration, and hostility.”

“In a lot of non-Western tribal cultures there is a kind of like a basic happiness that people have. Our culture is all about the pursuit of happiness, but at the core there’s a basic, kind of, general sense of insatiability and unhappiness.”

“I don’t think that the nuclear family is the natural model, or good model, for raising a child. I think, actually, the tribal community is the proper model.”