[NOTE: The following quotes are by Dr. Timothy Leary.]

“We know that typically the real changes in human nature, the changes in human politics and economics and society, are brought about by two things: By people who have a map or a vision or a model of where we’re going to go, these are the philosophers. And then the technicians, the people who get together the printing presses, or the compasses, or the high technology that can take us where we want to go.” 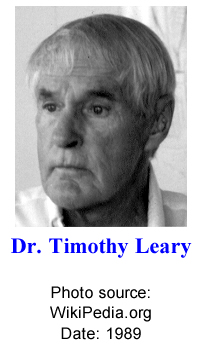 “Viewed in the 1930s, when Einstein came to America, he was considered as far out as a crack dealer.”

“Heisenberg taught us to take the universe very personally … in both senses of the word.”

“So who? Who’s gonna prepare a civilization of factory workers and farmers and people who haven’t even got the Model T Ford yet? Who’s gonna prepare them for an Einsteinian, relativistic, quantum physical, ever-changing, probabilistic universe? Who? Well you know who you can count on at every time in human history when we had to make a big philosophic lurch forward. Who always came to the front and saved the day and made us feel happy and comfortable with a new future? I’m talking about those friends of ours who have always been around when we needed them, the musicians, and the artists, and the poets, and the writers, and the bards, and the performers, and the storytellers, and, OK, the minstrels, the rock n’ rollers. Right! The actors, the script writers.”

“The whole 20th Century, to me, is the story of how artists and writers prepared us to be comfortable in a quantum-physical world.”

“We’re talking about a generation of people who, since the time they were born, have been inundate by data, electronic data. To the Baby Boomers and subsequent generations electronic data is the ocean they swim in.”

“Of course, everybody got down on the poor doctor [Benjamin Spock]. He was blamed for the excesses of the sixties, ha ha. I was glad to have him get blamed otherwise I would have gotten blamed.” 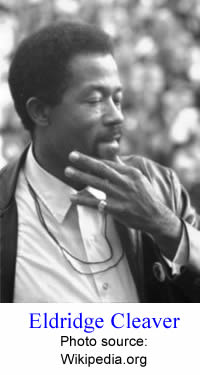 “The psychedelic pudding hit the fan in the sixties when the Spock kids hit high school and college, and they wanted a gourmet education, and they wanted connoisseur sex. … Gee, we said you’re the best, but we didn’t realize that you guys would take us seriously.”

“The Sixties were the adolescence of the Baby Boom.”

Following the talk by Dr. Leary I play a short personal message from Eldrige Cleaver to Timothy Leary that was recorded on January 7, 1995. The message Cleaver was so intensely trying to convey to his friend, Tim Leary, was that he believed it was imperative that the U.S. elect a woman president in the year 2000. Unfortunately, neither of these two important historical figures are alive today, and thus we can only speculate as to what they would think about the state of affairs in 2008. 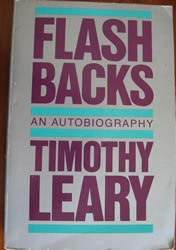 And by William Gibson:
Neuromancer