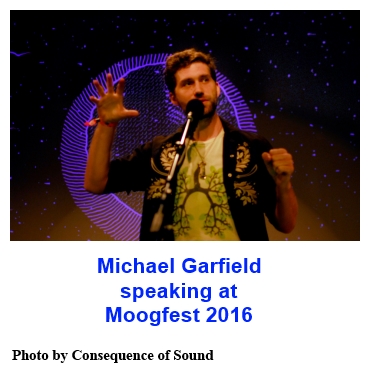 Today’s program features Michael Garfield who went to school for paleontology and then psychology before leaving academia to embark on a decade-long “trans-disciplinary” independent study of the intersections between art, science, and philosophy. As an experimental acoustic-electronic guitarist-singer-songwriter, as a scientific illustrator turned performance painter, and as a writer and speaker, Michael’s work is an attempt to help articulate a vision for the best possible future for us – one that doesn’t suffer the insane delusions of our separation from nature, technology, and each other.
According to Cap Blackard, writing for “Consequence of Sound” this talk by Micheal rates in the top 25 of the 333 performances at this year’s version of the Future Music/Future Thought Festival. He goes on to say: “Easily the most mind-opening presentation Moogfest 2016 had to offer – a multidisciplinary monologue that rivaled Brian Eno’s Moogfest 2011 keynote for all the unexpected twists and turns it took. This one-man show saw artist-musician Michael Garfield take a captive audience on a vision-quest through the lands where metaphysics and emerging technology meet. Make no mistake – it was a ramble, but an insightful and fascinating one from start to finish that traveled from the ancient dragon god Tiamat to the Victorians laying the transatlantic telegraph cable to the Manhattan Project giving birth to a new age of fear and awareness. The “psychedelic century”? That’s the here and now that’s just beginning, and the more our technology graduates us to the alchemical act of creation, the closer humanity comes to confronting “the cosmic mystery that we are.” Heavy and heady stuff, and a pleasant counterpoint to the doom and gloom of the average transhumanist cybergrumps whose future-thinking seems improbably grounded in the limited perceptions of the present.”
Download
MP3
PCs – Right click, select option
Macs – Ctrl-Click, select option 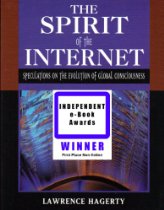 The Spirit of the Internet:
Speculations on the Evolution of Global Consciousness
by Lawrence “Lorenzo” Hagerty