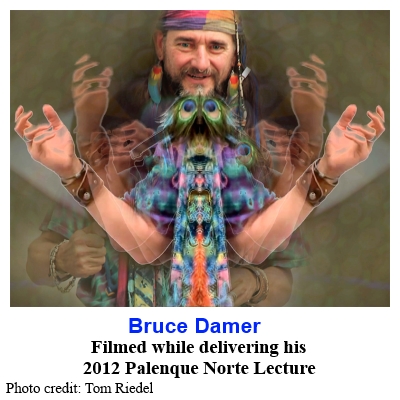 Bruce Damer takes the 2012 Palenque Norte audience at the Burning Man Festival on a far flung journey into what he calls his practice of “global multi-cultural, multi-ethnic, multi-technic shamanism” where you “put yourself on the shelf” and dive deeply into the worlds of Pentagon think tanks, NASA mission designers, the tribal cultures of Pakistan, the Swiss, Egyptologists, IT professionals, and Christian Evangelicals, to come back with the true alchemical gold. With apologies to Terence McKenna, he says “there is no dominator culture” and that if we aren’t careful we can collectively fall for cartoon epistemologies, chase chains of weaker and weaker claims, and become a victims of our own delusions, and fall prey to others’ unsubstantiated theories. Bruce advises everyone to become their own best skeptic and develop “critical intelligence”. If someone says something that strikes you as flaky or just doesn’t feel right, Bruce suggests that you think it through before you pass on their meme.

Check out all of the projects Bruce talks about at his personal site at: www.damer.com