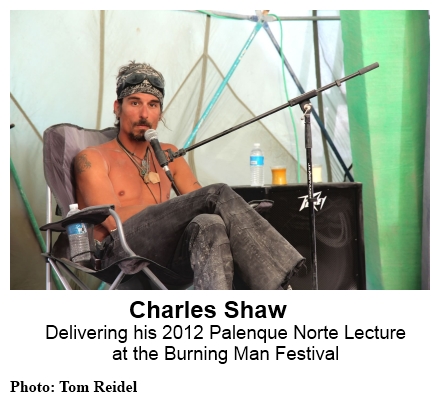 [NOTE: All quotations are by Charles Shaw.]

“Having a felony conviction, and having a drug conviction, essentially makes you a second class citizen.”

“For the lower classes, the poorer classes, which generally in this country are people of color, drug laws have always been used as a way to control them.”

“And if you take away the distinction between tobacco and alcohol and cannabis and cocaine or alkaloids or whatever, what you’ve got is a war against altering consciousness.”

“But what they’re trying to stop more than anything is ideas. Because what it is is a war of ideas. And it is a war of control, a breaking away from an external control factor, like a government, or a religion, or an ideology, or an economy that enslaves you, and thinking outside the box in revolutionary terms to try to solve it.”

“The true revolutionary leaders, I think, are going to be the ones who figure out how to not go in the street and how to disseminate the revolution by other means.”

“I also think that the real revolution is going to come from women, personally. I think enough guys have tried to lead the revolution, and it’s always the same thing because men have the same intentions, we always enter into a war paradigm. And we’ve gotta stop that war paradigm, and at least the feminine will allow us to get out of that war paradigm and get into something that is a collaborative negotiation of disputes and grievances. But I don’t know what’s that going to look like.”

“The Politics of Heroin: CIA Complicity in the Global Drug Trade” by Alfred W. McCoy

Banks sell debt for pennies on the dollar on a shadowy speculative market of debt buyers who then turn around and try to collect the full amount from debtors. The Rolling Jubilee intervenes by buying debt, keeping it out of the hands of collectors, and then abolishing it. We’re going into this market not to make a profit but to help each other out and highlight how the predatory debt system affects our families and communities. Think of it as a bailout of the 99% by the 99%.