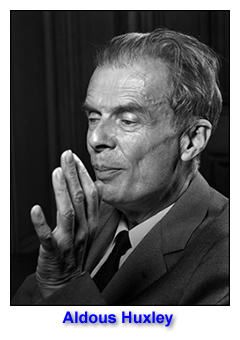 [NOTE: All quotations are by Aldous Huxley.]
“To possess power is ipso facto to be tempted to abuse it.”
“When advancing science and acceleratingly progressive technology alter man’s long-standing relationships with the planet on which he lives, revolutionize his societies, and at the same time equip his rulers with new and immensely more powerful instruments of domination what ought we to do? What can we do?”
“Extreme poverty, when combined with ignorance, breeds that lack of desire to better things, which has been called ‘wantlessness’, the resigned acceptance of a subhuman lot’.”
“From disappointment through resentful frustration to widespread social unrest, the road is short. Shorter still is the road from social unrest through chaos to dictatorship, possibly of the Communist Party, more probably of generals and colonels.”
“And even where democratic institutions exist, science technology and preparation for war combine to pose a serious threat to civil and political liberty.”
“Prisoners of their culture, the masses, even in those countries where they are free to vote, are prevented by the basic postulates in terms in which they do their thinking and their feeling, from summarily decreeing an end to the collective paranoia that governs international relations.”
“Some day, let us hope, rulers and ruled will break out of the cultural prisons in which they are now confined.”
“In the past, one of the most effective guarantees of liberty was governmental inefficiency. The spirit of tyranny was always willing, but it’s technical and organizational flesh was generally weak. Today the flesh is as strong as the spirit.”
“My own view is that it is only by shifting our collective intention from the merely political to the basic biological aspects to the human situation that we can hope to mitigate and shorten the time of troubles into which it would seem we are now moving. We have to get it into our collective heads that the basic problem now confronting us is ecological.”
“It might be sensible to think less about the problem of landing a couple of astronauts on the moon and rather more about the problem of enabling three billion men, women, and children, who in less than forty years will be six billion, to lead a tolerably human existence without in the process ruining and befouling their planetary environment.” -Aldous Huxley (November 30, 1962)
“All that I meant was, the sort of basic frame of reference in which political activities will take place shall be less culture-bound and more ecology-bound, let’s say.”
Download
MP3
PCs – Right click, select option
Macs – Ctrl-Click, select option
Posted in Culture, Environment, Evolution, Future, Huxley and tagged Culture, Environment, Evolution, Future, Huxley.