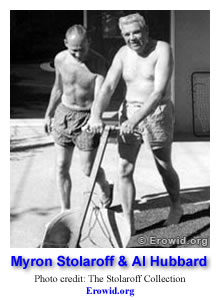 On October 30, 1964, Dr. Humphry Osmond, Myron Stolaroff, Willis Harman, and Al Hubbard took LSD together. The next day they discussed what was learned. This is a recording of that gathering, and it is the first of the recovered recordings from The Stolaroff Collection, hosted at Erowid.org.

“From our crowd I think very, very few people get off the beam the way I would consider Leary and Alpert are off the beam, for example.” -Myron Stolaroff

“[We should use these substances] in a way which will not simply allow us to become aware of what any decent mystical saints have been aware of for a long, long time, but to become aware of how to produce a rise in the social level of communication, which will, indeed, transform the species from a biological animal to a communicating animal, which is what Teilhard had in view.” -Humphry Osmond

“[The map of the noosphere] is not to be created by mucking up bits of the Book of the Dead and saying how smart chaps were. This is a fraud.” -Humphry Osmond

“When you most need help is when you least want it.” -Myron Stolaroff

“This is the life that I’ve seen: Live or die. Be intelligent enough to get along. Don’t walk in two places without knowing where you’re going.” -Al Hubbard

“The ten year delay in our work brought about through our struggle with NIH in Washington and through being unable to cope with a large and powerful power-system there has produced, it’s resulted in probably several million people being quite unnecessarily damaged.” -Humphry Osmond (November 1, 1964)

Please Support the Archival Efforts
for
The Stolaroff Collection