[NOTE: All quotations are by Terence McKenna].
“Ayahuasca, in a way, is somehow more open to suggestion. These other things have their own agenda. Ayahuasca will work with you.”

“The possibility seems to be that what we call styles, or what we call motifs, are actually categories in the unconscious.” [Also see The Art of Steven Rooke.]

“Is there a necessary succession in style, or are these things pure chance?” 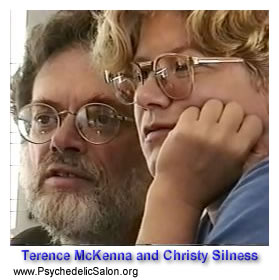 “Obviously, it’s some kind of freely commanded modality in the psyche with which we can have a relationship if we will but evolve a control language and a dialogue. And it remains mysterious.”

“Once you come face-to-face with these psychedelics, the trail ends. You have found the answer. … Now the question is, ‘What the hell do you do with it?’ “

“Once you have the psychedelic tool in hand then some real choices have to be made.”

“It puts people who are into this psychedelic thing in an entirely different stance from all other spiritual seekers, because all other spiritual seekers are furiously seeking. Psychedelic people are holding it back with all their power, because they are IN the presence of the Mystery. And then the trick is to get a spigot on it so that it can be turned on and off rather than coming at you like a tidal wave a mile high and twenty miles wide.”

“What the churches are peddling is high abstraction, and you really have to work yourself up into a lather to be able to accept that as worthy of that kind of attention. The psychedelic subset of society is into an experience, and it’s accessible.”

“The race isn’t to the swift. It’s to the thoughtful.”

“There will be difficult moments in a five-gram [mushroom] trip, but on the other hand certain questions will be solved forever for you, because you will validate the existence of this dimension. You will see what your relationship to it is.”

“This is a general comment that you should take a committed dose of whatever it is you’re taking so that there is no ambiguity, because there’s nothing worse than a sub-threshold psychedelic experience.”

“On ketemine you can get so out there that it is a major intellectual breakthrough to realize that you’re on a drug.”

“At the interface of the sayable and the unsayable [in a psychedelic experience] is the novel, the new, the never before seen, said or done. And that’s what I think it’s important to try and bring out, ideas. Because I think we are the animals that bring back ideas.”

“Human populations that do not have contact with the psychedelic tremendum are neurotic because they are male ego dominated.”

“One way of assessing the toxicity of a drug is how do you feel the next day?”

“If you eat before you sleep after a trip, it won’t be nearly so hard a come-down.”

“DMT is the most powerful hallucinogen there is. If it gets stronger than that I don’t want to know about it.”