[NOTE: All quotations below are by Timothy Leary.]

“The people who were teaching us about consciousness-expanding drugs were people like Aldous Huxley, Alan Watts, even Henry Luce, the respectable conservative founder of ‘Time’ magazine. There was a large group of thoughtful people who told us that the doors of perception were going to open and an avalanche of change would happen.”

“Harvard is there to train Ivy Leaguers to go to Washington and Wall Street and keep the wasp establishment going. They’re not supposed to be turning out new Buddhas and a new brand of science fiction neuronaughts.” 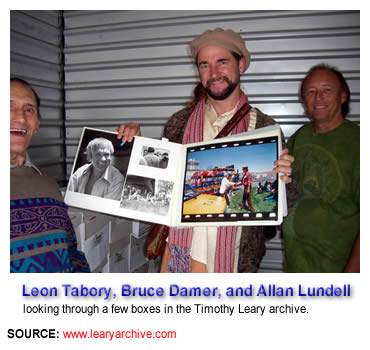 “The history of America is the history of those of us that belong to this wonderful brotherhood and sisterhood of avant-garde inner voyagers. We believe that we’re the American tradition. And so we really weren’t that surprised when the thing exploded in the Sixties. That’s what we’d signed up for.”

“I personally now feel that the concept of generation, the generation you belong to, is one of the most important things in your life, because you’re going to be swimming like a school of fish in this school of your own generation.”

“It’s so simple, too. If you want to change, it’s geography, just move to the place different people hang out, and listen.”

“I see very clearly that the age of the people you hang out with determines your age. … Generations are temporal units, and you can jump generations, you can migrate. And how do you migrate from one generation to another? It’s time travel, just hang out with people of different ages.”

The Art of Steven Rooke

“Lunch with the Shulgins” (video)