[NOTE: All quotes below are by Dr. Timothy Leary.] 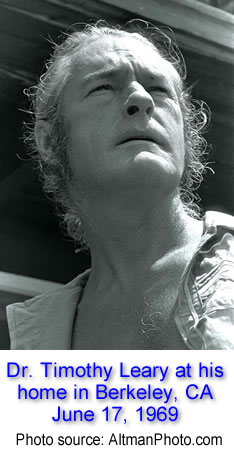 “Psychedelic drugs are to the human mind today what the discovery of the microscope was to medicine and biological science three or four hundred years ago. Psychedelic drugs expand and speed up consciousness. They are going to bring about a tremendous change in our society, in our view of man and our way of life in the future.”

“When you take LSD you do go on a trip. It’s a voyage. It’s the most ancient voyage that man has ever known, the one beyond your mind and your current tribal situation into the incredible possibilities which lie inside. So it’s a fair statement to say an LSD voyage is a trip.”

“A chemical age is going to have a chemical sacrament.”

“Every great breakthrough in religion and science has always involved a new method of bringing into consciousness what you couldn’t see before, the telescope, the microscope. And you remember, the fellow that developed the telescope back in Florence a few hundred years ago got into the same sort of trouble with society that we’re in today. Any new instrument which opens up consciousness threatens the establishment.”

“Stay away from it unless you’re willing to take LSD in a state of grace for serious and important purposes.”