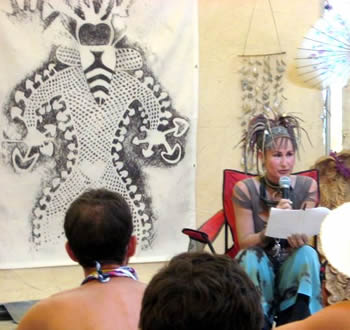 Alicia Danforth, who is Dr. Charles Grob’s research assistant, leads a Playalogue at the 2007 Burning Man Festival. In this wide-ranging group conversation, Alicia skillfully guided our eclectic audience through the intricacies of FDA-approved psychedelic research.

“I’m hoping to spark ideas in other people’s minds about what can be done to get a foothold in advancing psychedelic research.” –Alicia Danforth

“I tend to think of music [in a therapeutic psychedelic session] as a little boat you can hop on when you’re journeying and ride to wherever you need to go.” –Alicia Danforth.

ALSO SEE:
Ecstasy : The Complete Guide : A Comprehensive Look at the Risks and Benefits of MDMA by Julie Holland, M.D.