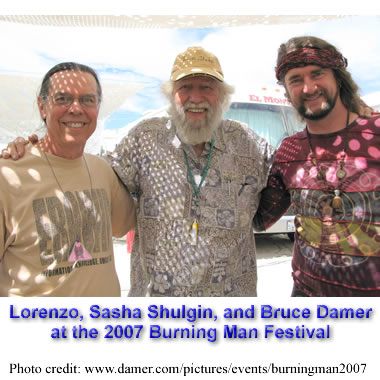 [NOTE: All quotations below are by Bruce Damer]

08:17 Bruce tells about the three-day white out that followed the 2002 Burning Man festival.

15:59 Bruce talks about the problem of dust on the moon.

18:46“We all grew up seeing buried lunar bases and happy astronauts running around mining and other things, it ain’t going to happen. I concluded, after a lifetime of believing this and two years of actually working on this problem, that we’re not going to do this. We don’t have the technology.”

31:42 “What I’m trying to build up is a picture of why you don’t need religion. All you need, if you want to be awestruck, is to consider the improbability of you, the improbable miracle that is you.”

35:05 [Commenting on a computer-generated depiction of an astrophysical zoom-out from Earth] “If the universe was at all attempting to find consciousness, for a split-second, a primate brain on Earth had in its little synaptic gaps a picture of the universe. The universe saw itself momentarily.” 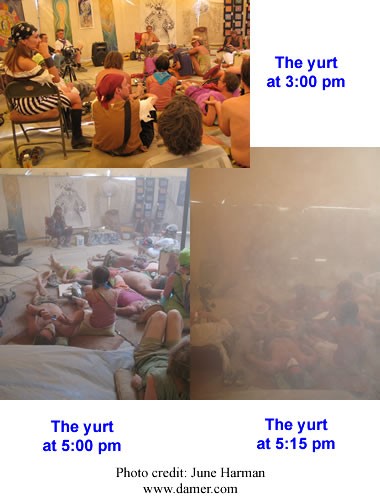 38:48 “What if the ultimate goal of life, of the universe, was to become fully conscious? And what I mean by that is the entire universe becomes, instead of this jumble of matter and quantum whatever, it becomes a single conscious being?”

42:02 “For life itself to have a chance to expand out into the universe, and populate and infuse the universe, we may be one of its only shots [at this], at least in our area. We’re one of the only chances to do this, and we have a very limited window.”

46:52 Bruce talks about the possibilities ALife might explore should it ever be set free in a quantum computer.

51:18 Bruce tells the story about his vision (during the AlChemical Arts Conference in September 1999) of Terence McKenna’s ‘getaway car’.

1:03:57 Bruce begins a stream of consciousness riff about quantum reality that is packed with mind-blowing concepts and ends . . . “In the universe you are all participants. So if you think about it you change it. If you try to study it you change it.”

1:08:39 “The next time you have a powerful dream consider that it may have come from the field.”