[NOTE: All quotations below are by Pablo Amaringo, as interpreted by Lorenzo from Zoe7’s translation.]

Pablo Amaringo was elected to the Global 500 Roll of Honor of the United Nations Environmental Program in recognition of outstanding practical achievements in the protection and improvement of the environment through the USKO-AYAR school. 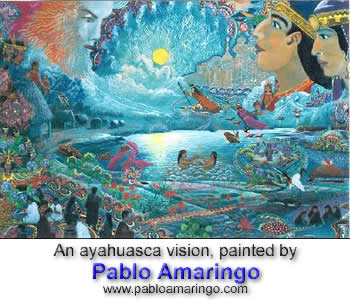 07:16 “I was born and raised Catholic, but I did not really subscribe to the way in which that religion interpreted existence and life, particularly life after death.”

13:02 “From experience, I came to learn that ayahuasca bestows upon the user knowledge about a variety of topics, not only consciousness and perception, but also leads one to realize that what we perceive is an illusion.”

17:57 “In 1968 I had a revelation that we live in a sort of organism, an organism somewhat like a ship in that it keeps us, and not just us humans, but every living thing in something like a cocoon. And I was told that this home of ours, this ship, is becoming endangered simply because people are not taking care of the environment.”

22:30 “We should not think only about the immediate future for ourselves living on this planet, but also about the futures of our children and grandchildren. What are we going to leave for them? What are they going to find? Those are questions we should ask and resolve before it’s too late.”

23:46 “One of the chief problems here is the lack of love, love for the environment and love for each other.”

28:02 Pablo begins talking about the ayahuasca visions in his paintings.

47:36 “By going into the psychedelic experience, by going into the world of plants, one is able to first and foremost know about himself. This opens up a whole new realm of possibilities in his eyes.” 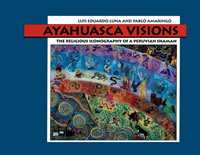