We were saddened to learn of the untimely death of Daniel Jabbour on April 13, 2014.

Celebrating The Life Of Daniel Jabbour: An Intersection Of Psychedelics, Activism And Technology

A transcript of this podcast is being created at https://www.fanscribed.com/transcripts/7-376-jabbor-coming-out-of-the-psychedelic-closet/ — we’ll finish it with a handful of volunteers but the more who can help, the faster it will be completed. 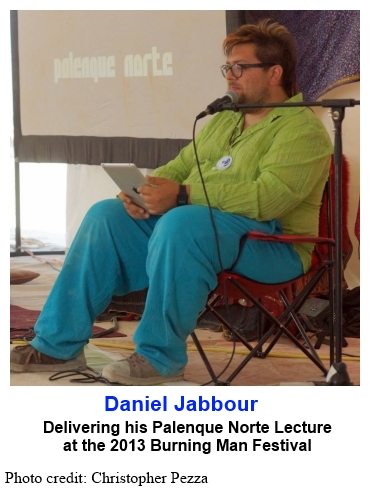 PROGRAM NOTES FOR THIS PODCAST:

For anyone under the age of 30, this may be the most important podcast in the salon. Daniel Jabbor is a young entrepreneur and drug policy activist who, among many other accomplishments, and in a very short period of time, founded the now 4,000+ strong Psychedelic Society of San Francisco. Today’s podcast features two of Daniel’s talks, one from the recent Palenque Norte Lecture Series at the 2013 Burning Man Festival, and another from a psychedelic conference at which he detailed some of the successes of the SSDP, Students for a Sensible Drug Policy. No matter what your age, this is an important message for you to think about. If you know history, you know that quite often it is the young people who are the ones to change its course. These talks by Daniel Jabbor will give you more positive hope for the future than you have had in a long time.

[NOTE: The following quotations are by Daniel Jabbour.]

“The War on Drugs was started as a way to control and segregate various groups of society.”

“The drug war is increasingly a war on youth. Over 50% of marijuana arrests in this country [the U.S.] are people under 29 years old.”

“We desire to alter our state of consciousness. It’s an evolutionary thing.”

The Psychedelic Society of San Francisco

Students for Sensible Drug Policy (SSDP) is the only international network of students dedicated to ending the war on drugs. At its heart, SSDP is a grassroots organization, led by a student-run Board of Directors. We create change by bringing young people together and creating safe spaces for students of all political and ideological stripes to have honest conversations about drugs and drug policy. Founded in 1998, SSDP comprises thousands of members at hundreds of campuses in countries around the globe.

Be sure to visit