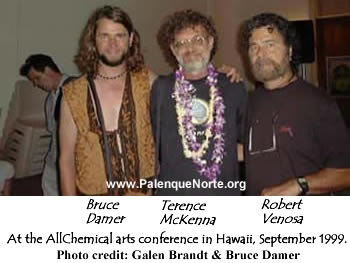 A talk by Terence McKenna in Denver – April 1999

“This is a struggle between novelty and habit.” . . . “[Your culture] is the greatest barrier to your enlightenment, your education, and your decency.” . . . Cultures are virtual realities made of language.”

One of the things Terence covers in this talk is his take on virtual reality, VR. On February 25th, about two months before this talk, Terence participated in an experiment in avatar-based random in 3D virtual worlds on the Internet.

“We were operating live from Terence’s jungle retreat on the Big Island of Hawaii on a wireless packet radio network. The hosting area was finished off in the couple of hours before we went live at 3 pm Hawaii time. Fans were already arriving by that time and helping out by finding audio files to be linked in, images and other Terence netmorabilia. Approximately 40 fans showed up with very short notice from an announcement posted on Terence’s fan lists. Another 20 or show streamed in for days after the event, to be met by “super fan” Roy Batty. In the meantime, see Cathie Leavitt’s “Trip Report” for an excellent first hand newbie view of the experience.” [From DigitalSpace.com . . . article about Terence and 3D virtual worlds]