MP3s of Christian Rätsch at Palenque 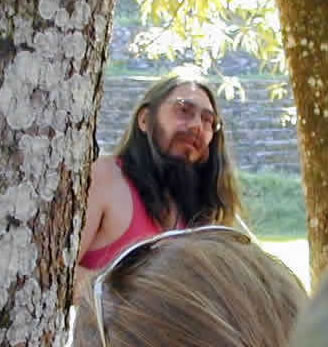 Christian Räetsch is an author, an anthropologist and Germany’s leading expert on ethnopharmacology. He lived for three years with the Lacandón Indians in Chiapas, Mexico and did his doctoral thesis on their spells and incantations. Rätsch works in Hamburg, Germany, as a freelance author and lecturer and conducts research into the ethnopharmacology of psychoactive plants and animals. He has published a number of books on these topics, both in German and in English, and is the founder and co-editor of The Yearbook of Ethnomedicine and the Study of Consciousness.

[The above extract is from Erowid’s page about Christian, where you will also find many links to his books and essays.]

In our podcast of the 10th edition of the Psychedelic Salon, we are featuring a talk given by Christian at the ancient Mayan ruins near Palenque, Mexico. Christian’s presentation was given in the context of a tour of the ruins that he was conducting as a part of the 2001 Entheobotany Conference at the nearby Chan Kah hotel. The photo above, and all pictures on this page, were taken by Richard Racette as the talk was being recorded. The recording was made by Matthew Pallamary, author of Land Without Evil.

A few books by Christian Rätsch