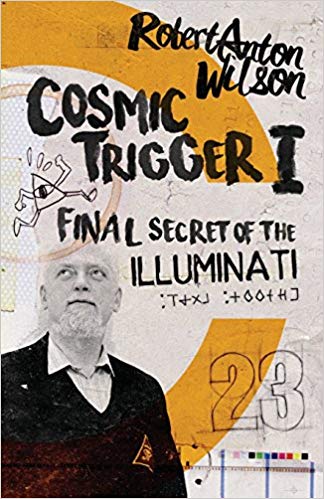 Date this lecture was recorded: September 1987.

[NOTE: All quotations are by Robert Anton Wilson.]

“I used to be a Libertarian, but they had too many rules.”

“And by 1968 a Gallup Poll showed that 70% of the population were against war. There’s never been a time in the history of this country where 70% of the people opposed the government on a thing like war. So I regard LBJ as a pacifist president because he made pacifism so popular.”

“Alan Watts said to me 20 years ago the chief error of academic historians is the belief that the Roman Empire fell. It never did. It still controls the Western World through the Vatican and the Mafia. Well, Alan was exaggerating. It doesn’t control the Western World. It’s just trying to.”

“The American people are the most policed and governed and watched and observed and snooped upon people in the whole world.”

Cosmic Trigger I: Final Secret of the Illuminati
by Robert Anton Wilson