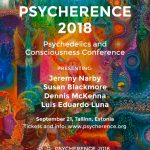 Date this lecture was recorded: March 1996

“The way to get off on DMT is after you feel completely peculiar you have to do one more enormous hit. This is where courage comes in.”

“A meme has gotten loose on this planet that is the social equivalent of cancer in my opinion, and what it is is capitalism. Capitalism does not serve human beings. It serves itself in the same way that cancer does not serve a human being.”

“The reason people fetishize objects is because they have no accessible dimension of inner worth. They feel worthless.”

“I think the Internet probably will turn out to be very toxic for capitalism.”