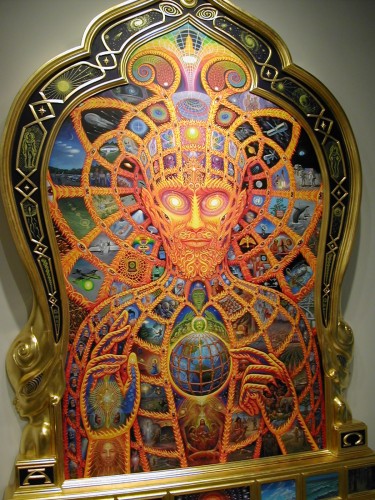 Date this lecture was recorded: April 1995

“If a Buddhist could design their own genome they would become a fungus, because a fungus is a primary decomposer. It is the only karma-less place in the food chain. There is no karma for the fungi. They don’t destroy any life whatsoever.”

“The trick is going to be to recognize the extraterrestrials.”

“I think probably the biota of the Earth is riddled with extraterrestrial genes, if not organisms, and possibly intelligences.”

“It’s very clear to me that every abduction case around, except for a vanishingly small number that we can put in the classical category of stigmata, can be explained by one simple fact: People are losing the ability to distinguish dreams from memories.”

“I think we’re getting set, basically, to decamp into the imagination. That the imagination is as real a place as across the river is if you’ve just acquired eyes.”

“A shaman is a seer, is a prophet, is a higher dimensional mathematician. And they may not use tensor equations to express what they’re doing, but mathematics before symbols is experience.”

“We have unleashed such novelty that I think we’re in the terminal phase of decamping from three dimensional space. We are leaving the womb of Newtonian being for something else, the imagination. And the birth is tumultuous. The entire planet is at risk.”

“If this planet hadn’t been wrecked sixty-five million years ago we wouldn’t be here. Well then, what is our position on planetary catastrophe? We’re in the process of making one. Is it so that sixty-five million years in the future an organism filled with love, and justice, and intelligence will look back at our skeletons in the shale and say, ‘Well, they had a good thing going, but if it hadn’t been for their extinction we wouldn’t be here.’ “

“Thinking Outside the Quantum Box”
by Bernardo Kastrup