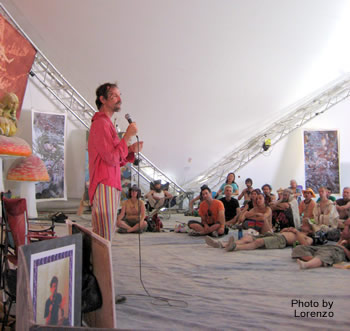 Date this lecture was recorded: April 1995

“I take psychedelics to be the catalysis of language.”

“This great period of creativity that we’re living through now in the sciences, in the arts, in the implementation of exotic technology, I think this is the real legacy of the Sixties. The people who run these fancy computer companies, and the World Wide Web, and the Net, and CERN, and all that, they’re all freaks. They’re all people who came up through the Sixties and have somehow fitted themselves in to straight society. But the great bulk of creative work in society and those areas is being done by people who took psychedelics.”

“On psychedelics essentially you feel, or you see, the morphogenetic field that surrounds objects.”

“Clearly we have become a toxic drag on the rest of nature.”

“What the New World Order is is a Corporate Order.”

“The best substitute for psychedelics, which takes a lot more time, energy, and dedication, is penny-less travel in Asian countries.”

“If I had to say one thing that DMT is, it’s alien beauty.”

“I don’t think it’s an exaggeration to say that at the peak of a psychedelic experience you see more art in a half an hour than the human race has produced in the last thousand years.”

Download a free copy of Lorenzo’s latest book,
The Chronicles of Lorenzo – Volume 1