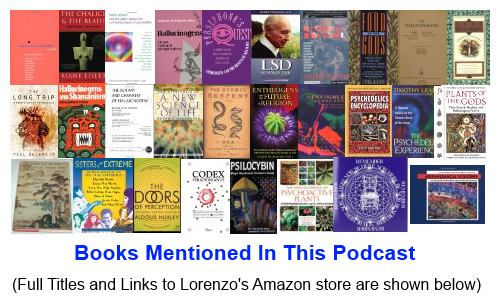 “One of the things that people don’t do enough of when they do psychedelic work is spend time in the library.”

“What I always hoped for out of the psychedelic voyaging was to bring back something. I always felt, and still feel, that that is the attitude with which you should go into these things.”

“I really think that the psychedelic realm is the realm of ideas, and that ideas which change the world come first from that place.”

“Life, carefully examined, is actually a form of allegorical literature with a very tight constructural grid laid over it.”

“The future holds no terrors for a person who knows how process inevitably unfolds. They are always right and with it each moment.”

The Hallucinogens
A. Hoffer; H. Osmond

A New Science of Life: The Hypothesis of Morphic Resonance
Rupert Sheldrake

The Chalice and the Blade: Our History, Our Future
Riane Eisler

True Hallucinations: Being an Account of the Author’s Extraordinary Adventures in the Devil’s Paradise
Terence McKenna

The Invisible Landscape: Mind, Hallucinogens, and the I Ching
Terence McKenna, Dennis McKenna

Food of the Gods: The Search for the Original Tree of Knowledge A Radical History of Plants, Drugs, and Human Evolution
Terence McKenna

A few more suggestions from Lorenzo

The Psychedelic Experience: A Manual Based on the Tibetan Book of the Dead (Citadel Underground)
Timothy Leary

Entheogens and the Future of Religion
Edited by Robert Forte

One Foot in the Future
Nina Graboi

Sisters of the Extreme: Women Writing on the Drug Experience
From Park Street Press

The Cosmic Serpent: DNA and the Origins of Knowledge
Jeremy Narby

The Doors of Perception and Heaven and Hell
Aldous Huxley

The Encyclopedia of Psychoactive Plants: Ethnopharmacology and Its Applications
Christian Ratsch, Albert Hofmann

The Long Trip: A Prehistory of Psychedelia
Paul Devereux