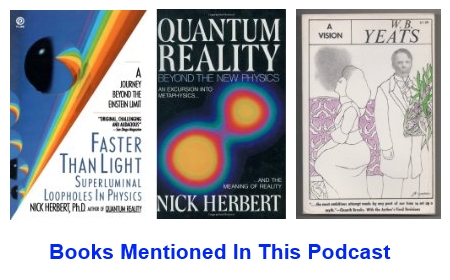 [NOTE: All quotations are by Terence McKenna.]
“Biology seems to be a chemical strategy for amplifying quantum mechanical indeterminacy so that it leaves the subatomic realm and can be present in a hundred and forty five pound block of meat.”

“Chaos is roving through the system and able to undo, at any point, the best laid plans.”

“Because the planetary culture is becoming ever more closely knitted together all its parts are becoming co-dependent.”

“National governments are under paid, under staffed, and under talented.”

“Don’t worry. You don’t know enough to worry. . . . Who do you think you are that you should worry, for cryin’ out loud. It’s a total waste of time. It presupposes such a knowledge of the situation that it is, in fact, a form of hubris.”

“Our medium is meat, but we are made of information.”

Quantum Reality: Beyond the New Physics [Paperback] by Nick Herbert