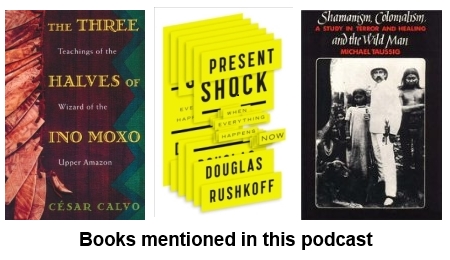 “Why does mathematics describe nature. That’s a deeper question than most.”

“The real justification for psychedelics is that they feed new data into your model.”

“So the idea is to triangulate a sufficiently large number of data points in your set of experience that you can make a model of the world that is not imprisoning. That’s why, second to psychedelics, I think travel is the most boundary-dissolving, educational enterprise that you can get mixed up in.”

“I think the experience over the past thousand years is that ideology is poisonous. . . . The world seen through the lens of ideology is a very limited world.”

“I think what electronic culture permits is incredible diversity, and what the print-created world demanded and created was tremendous suppression of diversity.”

“Television is, to my mind, the most insidious drug that the 20th Century has had to deal with.”

“The Internet is the global brain, the cyberspacially connected, telepathic, collective domain that we’ve all been hungering for.”

“The psychedelic species of visual beauty is something we don’t see in our furniture styles and our architecture. It seems to be coming in, literally, from another dimension, and yet it is undeniably moving. It’s beautiful.”

“Niagaras of beauty are flowing by untapped by ordinary consciousness. . . . Would that we could send robots who could film these psychedelic realities. . . . The presence of so much beauty is an argument to me that truth cannot be far away.”

“In the Newtonian and print-created social space that we’re walking around in you are like a self-extracting archive that hasn’t self-extracted itself yet. And then you take psilocybin and you self-extract and unfold.”

Three Halves of Ino Moxo : Teachings of the Wizard of the Upper Amazon
by César Calvo (Translated by Ken Symington)

Present Shock: When Everything Happens Now
by Douglas Rushkoff

Shamanism, Colonialism, and the Wild Man: A Study in Terror and Healing
by Michael Taussig