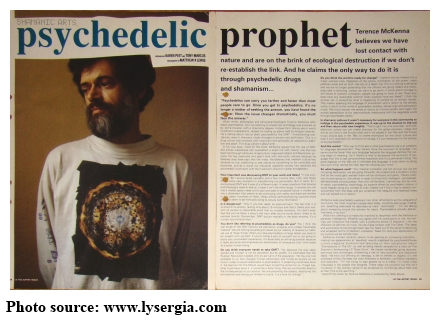 “Just because you have a nut theory it doesn’t mean that you agree with other nut theories. In fact, it often makes you very hostile to them. After all, there’s a limited pool there that we’re all after.”

“Because I believe psychedelics are a kind of higher dimensional sectioning of reality, I think they give the kind of stereoscopic vision necessary to hold the entire hologram of what’s happening in your mind. The old paradigm is gone.”

“I think psychedelics are sort of like doing calisthenics in preparation for the marathon at the end of time.”

“[Psychedelic experiences are] beyond the reach of cultural manipulation, and discovering this and exploring it is somehow the frontier of maturity. Culture is a form of enforced infantilism. It’s the last nursery, and most people never leave it.”

“It doesn’t matter what your cultural conditioning is, it falls into question under the influence of the psychedelic. And for most people that’s frightening.”

“We are the damaged heirs of a damaged cultural style which has been practiced now for about seven thousand years.”

“There is an intelligence in the species that is deeper than the societies and the systems that we erect to rule us, and this wisdom of the species can make enormous changes in the evolution of the mass psyche, such as the Renaissance for example.”

“Impressionism [in painting] is simply twenty minutes into LSD.”

“Belief is a form of infantilism. There is no ground for believing anything.”