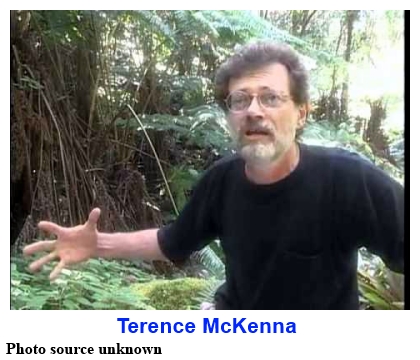 “I’m proposing on one level that hallucinogens be thought of as almost as social pheromones that regulate the rate at which language develops, and therefore regulate human culture generally.”

“Where psychedelics comes together with that is that it’s going to require a transformation of human language and understanding to stop the momentum of the historical process, to halt nuclear proliferation, germ warfare, infantile 19th century politics, all these things. It cannot be accomplished through a frontal assault upon it by political means.”

“Transformation of language through psychedelic drugs is a central factor of the evolution of the social matrix of the rest of the century.” (quote from 1983)

“Tribalism is a social form which can exist at any level of technology. It’s a complete illusion to associate it with low levels of technology. It is probably, in fact, a form of social organization second only to the family in its ability to endure.”

“I think there is a global commonality of understanding coming into being. And it is not necessarily fostered by institutions.”

“So it’s [shamanism] a kind of a profession. It’s almost like clergy. It’s to be deputized by the society as an ecstatic for the purpose of introducing back into society the material that comes from the mystical voyage for purposes of cultural renewal.”

“The history of man that you don’t know is what your unconscious is made out of.”

A People’s History of the United States: 1492 to Present
By Howard Zinn

Burr: A Novel
By Gore Vidal

Perpetual War for Perpetual Peace: How We Got to Be So Hated
By Gore Vidal