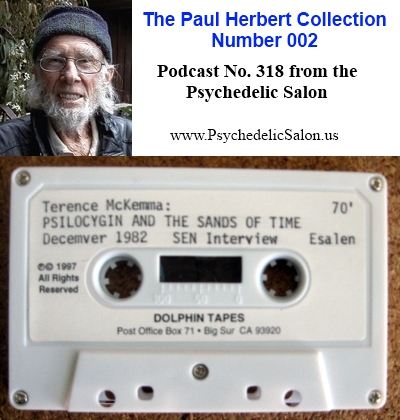 “I regard [my] degree more or less as a joke because it was self-directed study. They don’t really; there is no degree in shamanism.”

“This [repression of psychedelic drugs] has, in my opinion, held back the Western development of understanding consciousness because quite simply, these states, I do not believe, are accessible by any means other than drugs.”

“There is an element of risk [in using psychedelics]. I never tell people that there isn’t, but I think that the risk is worth it.”

“Psilocybin, tryptamine, is in my opinion the means to eliminating the future by becoming cognizant of the architecture of eternity, which is modulating time and causing history, essentially.”

“The immediate future of man lies in the imagination and in seeking the dimension where the imagination can be expressed. The present cultural crisis on the surface of the planet is caused by the fact that this is not a fitting theater for the exercise of imagination. It wrecks the planet. The planet has its own Eco-systemic dynamics, which are not the dynamics of imagination.”

“A birth is a death. Everything you treasure, and believe in, and love, and relate to is destroyed for you when you leave the womb. And you are launched into another modality, a modality that perhaps you would not have chosen but that you cannot do anything about.”

“There is no knowledge without risk taking.”

“Flying saucers are nothing more than miracles, and they occur essentially to bedevil science.”

“The drug may not be toxic, but you may be self-toxic, and you may discover this in the drug experience.”

“I think with the work we do with these drugs we are the earliest pioneers in what over the next 100 years will lead to an understanding of consciousness almost as a thing apart from the monkey body and brain.”

“We are consciousness. We may not always be monkeys.”

So I believe that a technological re-creation of the after-death state is what history pushes toward. And that means a kind of eternal existence where there is an ocean of mind into which one can dissolve and re-form from, but there is also the self, related to the body image but in the imagination. So that we each would become, in a sense, everyone.”

“There can be no turning back. We are either going to change in to this cybernetic, hyperdimentional, hallucinogenic angel, or we are going to destroy ourselves. The opportunity for us to be happy hunters and gatherers integrated into the balance of nature, that fell away 15,000 years ago and cannot be recaptured.”

“It is the people who are ‘far out’ who are gaining advantage in the evolutionary jostling for efficacious strategies.”

“On these matters of specific fact, like is the mushroom an extraterrestrial and that sort of thing, I haven’t the faintest idea. The mushroom itself is such a mercurial, elusive, Zen sort of personality that I never believe a word it says. I simply entertain its notions and try and sort through them, and I found that to be the most enriching approach to it.”

“Could any symbol be any more appropriate of the ambiguity of human transformation? What mushroom is it that grows at the end of history? Is it Stropharia cubensis, or is it the creation of Edward Teller? This is an unresolved problem.”