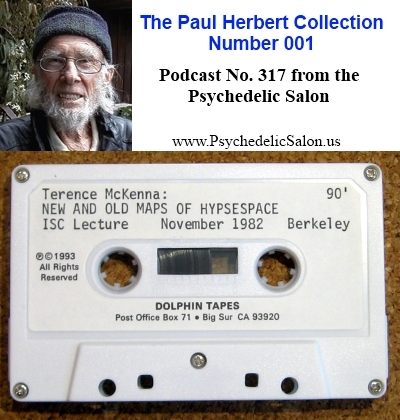 This is Tape Number 001 of the Paul Herbert Collection.
Some of the topics covered in this talk:
Two types of shamanism, narcotic and non-narcotic
UFOs and aliens
The end of history – the eschaton
The psychedelic experience
Psilocybin allows dialogue with the Other
Death and afterlife
Dreams
[NOTE: All quotations below are by Terence McKenna.]

“The central point about the psychedelic experience is the content of the experience. And this has been occluded or obfuscated by the behavioral and statistical and scientific methods that have been brought to bear to study hallucinogenic experience.”

“Experientially there is only one religion, and it is shamanism and shamanic ecstasy.”

“Shamanism, on the other hand, is this world wide, since Paleolithic-times, tradition which says that you must make your own experience the center piece of any model of the world that you build.”

“The content of the dialogue with ‘the Other’ is a content that indicates that man’s horizons are infinitely bright, that death is in fact, well, as Thomas Vaughn put it, ‘the body is the placenta of the soul’”

“Alchemy is about the generation of a psychic construct, a wholeness, a thing which has many properties, which is paradoxical, which is both mind and matter, which can do anything.”

“Psychedelic drugs, especially psilocybin, allow a searchlight to be thrown on these deeper levels of the psyche, as Jung correctly stated. But it is not a museum of archetypes or psychic constructs, as he seemed to assume. It is a frontier of wholeness into which any person, so motivated and so courageous as to wish to do it, can go and leave the mundane plane far behind.”

“But a mature humanity could get into a place where we no longer required these metaphysical spankings from messiahs and flying saucers that come along every thousand years or so to mess up the mess that has been created and try and send people off on another tack. And the way to do this is to look at the abysses that confront man as species and individuals and try to unify them. And I think that psilocybin offers a way out because it allows a dialogue with the overmind. You won’t read about it in “Scientific American” or anywhere else. You will carry it out.”

“Escape into the dream. Escape, a key thing charged against these drugs, that they are for escapists. I think the people who make this charge hardly dare dream to what degree they are escapist.”

“All information is everywhere. Information that is not here is nowhere.”

“We are, in fact, hyperdimentional objects of some sort which cast a shadow into matter, and the shadow in matter is the body. And at death, what happens basically, is that the shadow withdraws, or the thing which cast the shadow withdraws, and metabolism ceases, and matter which had been organized into a dissipative structure in a very localized area, sustaining itself against entropy by cycling material in and degrading it and expelling it, that whole phenomenon ceases, but the thing which ordered it is not affected by that.” [From the point of view of the shamanic tradition.]

“In shamanism and certain yogas, Daoist yoga, claim very clearly that the purpose is to familiarize yourself with this after-death body, in life, and then the act of dying will not create confusion in the psyche. You will recognize what is happening. You will know what to do. And you will make the clean break.”

“There is not the Newtonian universe deployed throughout the parsecs and kiliocosms of physical space AND the interior mental universe. They are the same thing.”

“The tryptamine molecule has this unique property of releasing the structured self into the overself.”

“I’m not an abuser. It takes me a long time to assimilate each experience. And I never have lost my respect for it. I mean I really feel dread. It is one of the emotions I always feel as I approach it, because I have no faith that my sails won’t be ripped this time.”

“Now your question about the dialogue. I mean this very literally. It speaks to you. You speak to it. It says things.”

More quotes from this talk may be found in Podcast 267.