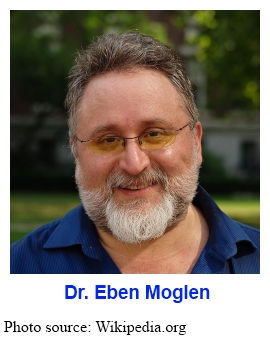 [NOTE: All quotations are by Eben Moglen.]

“For the policy makers, in other words, an overwhelming problem is now at hand: How do we have innovation and economic growth under austerity? They do not know the answer to this question, and it is becoming so urgent that it is beginning to deteriorate their political control.”

“Nobody will ever try to create a commercial encyclopedia again.”

“Disintermediation, the movement of power out of the middle of the Net is a crucial fact about 21st century political economy. It proves itself all the time. Somebody’s going to win a Nobel Prize in Economics for describing, in formal terms, the nature of disintermediation.”

“The greatest technological innovation of the late 20th century is the thing we now call the World Wide Web, an invention less than 8,000 days old. That invention is already transforming human society more rapidly than anything since the adoption of writing.”

“The way innovation really happens is that you provide young people with opportunities to create on an infrastructure which allows them to hack the real world and share the results.”

“We care about protecting people’s right to hack what they own. And the reason that we care about it is if you prevent people from hacking on what they own themselves you will destroy the engine of innovation from which everybody is profiting.”

“We said from the beginning that free software is the world’s most advanced technical education system. It allows anybody, anywhere in Earth, to get to the state of the art in anything computers can be made to do by reading what is fully available, and by experimenting with it and by sharing the consequences freely.”

“We should move to a world in which ALL knowledge previously available before this lifetime is universally available. If we don’t, we will stunt innovation which permits further growth. That’s a social requirement. The copyright bargain is not immutable. It is merely convenient.”

“The universalization of access to knowledge is the single more important force available for increasing innovation and human welfare on the planet. Nobody should be afraid to advocate for it because somebody might shout ‘copyright’.”

“Nobody should be fooled about the prospects for social growth in societies where fifty percent of the people under thirty are unemployed. This is not going to be resolved by giving them assembly line car-building jobs. Everybody sees that.”

“And we need to listen, democratically, to the large number of young people around the world who insist that Internet freedom, and an end to snooping and control, is necessary to their welfare and ability to create and live.”

“Disintermediation means there will be more service providers throughout the economy with whom we are directly in touch. That means more jobs outside hierarchies and fewer jobs inside hierarchies.”

“And there is a third aspect of privacy, which in my classroom I call autonomy. It is the opportunity to live a life in which the decisions you make are unaffected by others’ access to secret or anonymous communication.”

“The reason cities have been engines of economic growth since Sumner is that young people move to them to make new ways of being taking advantage of the fact that the city is where you escape the surveillance of the village and the social control of the farm.”

“The city is the historical system for the production of anonymity and the ability to experiment autonomously in ways of living. We are closing it.”

“The Network, as it stands now, is an extraordinary platform for enhanced social control. Very rapidly, and with no apparent remorse, the two largest governments on Earth, that of the United States of America and the People’s Republic of China, have adopted essentially the identical points of view. A robust social graph connecting government to everybody, and the exhaustive date mining of society, is both governments’ fundamental policy with respect to their different forms of what they both refer to, or think of, as ‘stability maintenance’. . . . We need, ‘we’ who understand what is happening, need to be very vocal about that.”