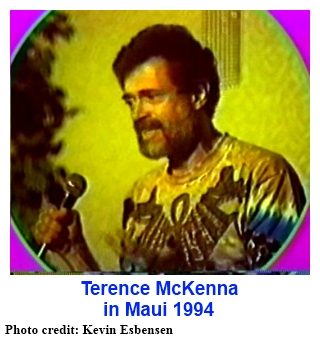 This is the first part of an evening lecture given by Terence McKenna in early February, 1994 on the Hawaiian island of Maui.

“Our [Western] civilization touches everyone on this planet. We are involved in a species-wide crisis, and it’s a crisis of adaptation and intelligence. If we can meet the crisis, if we can re-design the cultural machinery so that it can glide in to the new value systems that a limited Earth, and an electronically activated population demands, then we can use the crisis as a stepping stone to further exploration of the universe, further evolution, further unfolding.”

“Nature is an engine for the production of extinct species.”

“The psychedelic experience is not built in to your biology the way orgasm, or sleep, or hunger, or something like that is. It’s a physiological option that involves forming a symbiotic relationship with a plant.”

“We seem to be the creature that can download the ideas, the Platonic perfect forms of a higher dimension, into the world of matter. And so where we are there is an interfacing between the world of ordinary nature and some kind of transcendent force.”

“Speaking about the unspeakable means stretching the envelop of what can be said. When new things can be said new plans can be laid, new directions can be found out of a crisis.”

“Science has steered us deeply into the notion that nature is soulless and spiritless. And the practice of this idea has led us to the brink of catastrophe, global and species and ecological catastrophe.”

“Psychedelics are catalysts for the human imagination. That very simply is what they are.”

“[Biological] nature is a seamless community of intentionality. Nature is a gene-swarm covering the surface of the planet.”

“I believe that shamanism without psychedelics is shamanism on its way to becoming religion.”

“So we are like dysfunctional children. Something terrible happened to us in the childhood of our intelligence. We lost our connection to the Gaian matrix, to the goddess mother of the Earth who gives coherency to life, and when the connection was lost we fell into history.”