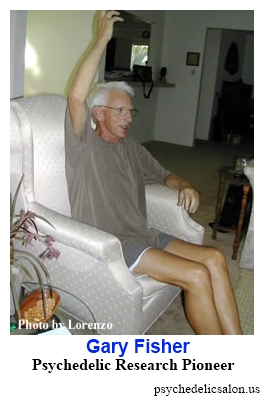 We are saddened to report that long time friend of the salon and psychedelic research pioneer extraordinaire, Gary Fisher has gone on to his next adventure.

“There is so much more psychedelic use in this country than any of us, even those of us who think we know a lot, are aware of. . . . According to [the government], 23 million Americans have used LSD since it became illegal. And that figure, because I’ve been tracking it, goes up 600,000 a year, pretty much rain or shine. So there’s 600,000 people this year who are going to be taking, and that just deals with LSD, that doesn’t deal with ecstasy or ayahuasca or anything else. But there’s this growing, continual large number of people, and they tend to be better educated and brighter, and we do have research on that. So what I’m doing a lot with this book is say, ‘Hey, it’s OK to admit what is true, which is the person next to you at your work probably had some acid in their background just as you did.” -James Fadiman

The Other Side of Haight: A Novel

ENTHEOGUIDE.NET
Meeting the Divine Within
A Manual for Voyagers and Guides and Supplemental Information

EROWID.ORG
Documenting the Complex Relationship Between Humans and Psychoactives