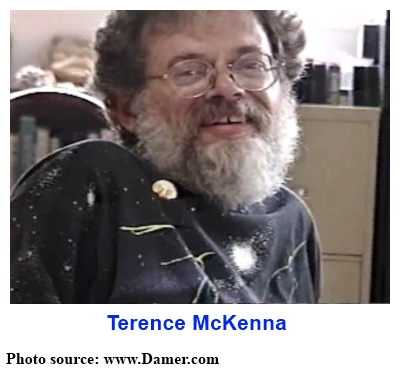 “There is no catalog of psychedelic effects, and so how does one know what the full spectrum is? It’s a very tricky matter.”

“At five dried grams (of magic mushrooms) it’s very easy to invoke a voice, a kind of logos-like phenomenon, which operates as the typical hierophant. It’s the teaching voice. It’s Virgil to Dante. It’s a very large and superior force which takes you by the hand and then narrates the various scenarios that you’re conveyed through. … The trick is to get something out of it and get away clean.”

“Human language is a psychic ability. I can make thoughts in your head by simply uttering small mouth noises.”

“We are not going to move into the future until we create that future through language.”

“I believe that people have deeper and subtler senses of humor. I think that people have more refined aesthetic sensitivity. I think people have a greater sensitivity to the mysteries of human interaction simply because so much LSD was taken in the Sixties. And these are permanent changes that will not be wiped out.”

“There is always a low level of mutants in a population, but they are of no consequence as long as the selective parameters remain the same. But when the selective parameters change suddenly these individuals, who were previously masked in the general population, the selective advantage that they have now comes immediately to the fore. And they act very quickly, and critically, to send the evolution of a given species off in a different direction. . . . It’s that the new types were always there but not with any advantage. It’s that the new situation has conferred a sudden advantage on them, and they are moving then into positions of dominance in the population, or the society if we’re talking about human beings. I think that the psychedelic experience is like that at the present level. There is a population of different people in the general population, and as conditions change these people will be seen to have adaptive advantages.”

“What the psychedelics really do, I think, is release us from cultural machinery and put you right up against the human essence.”

“I think there is a potential for immortality, but it isn’t assured. It is something that comes to the courageous. And somehow in the historical experience we’ve gotten the idea, through orthodox religions, that salvation comes to the subservient, and this is totally wrong. It is more like the Greek ideal of the hero, that if you’re heroic enough once you’re dead you’ll be a god. And I think this is what these things summon us all to.”