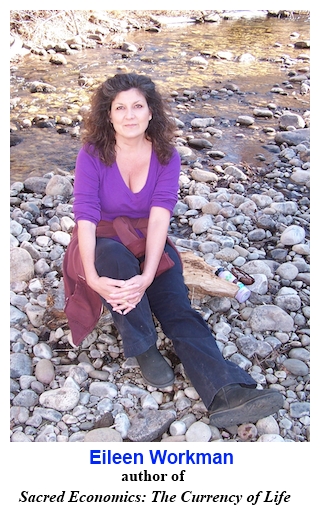 Matt Pallamary interviews Eileen Workman, co-founder of the Universe Project who spent sixteen years working in the financial services industry, most recently as a First Vice President of Investments with a major Wall Street investment firm.

Her new book, Sacred Economics: The Currency of Life has been praised by many, including Barbara Marx Hubbard, co-founder and chairperson of the board of The Foundation for Conscious Evolution who says of it:

Occasionally in human history a clear voice of good sense and compassion rises from the multitudes caught in the memetic mud of obsolete ideas about current reality. Thomas Jefferson was such a voice when he stated: “All men are created equal” at a time when there was no equality, at all. So now Eileen Workman sends a clear and intelligent message: We can live beyond the current monetary economy better, longer, kinder and more joyfully, and here is how to begin. Even though it might seem impossible, as the system continues to breakdown and the inequalities grow, her voice increasingly serves us as a guide to the next stage of evolutionary economics. We should all read it and place our faith and actions in the good sense it offers us, guiding us toward the next era of economics in the coming age.