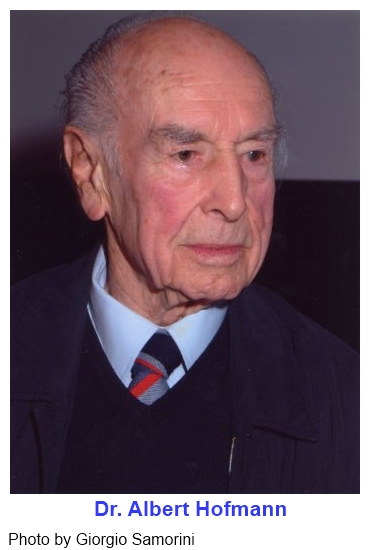 [NOTE: All quotations are by Albert Hofmann.]

“I reported about this bicycle ride because I had the feeling that time would stand still. It was a very strange feeling that I had never had before, this change in the experience of time.”

“It [my first LSD experience] became such a strange experience that I feared to have become insane.”

“At the climax I had the feeling to be already out of my body.”

“It [LSD] works on the very center of our psychic existence.”

“Nobody has died from toxic doses of LSD, not one case. All of the fatal cases were by accidents due to the disturbances of the consciousness of the senses.”

“They did not see any special effect on animals, because LSD works only on very high spiritual centers, on consciousness, which animals don’t have.”

“I never believed it [LSD] would become a pleasure drug on the streets.”

“I think, of course, the story of LSD is not yet finished at all. If we learn to use it with respect and under the right conditions I am sure the beneficial effects are enormous.”

“In antiquity they had institutions where people who liked to have a [psychedelic initiation] could go and have a very well elaborated condition to have a beneficial effect. But we have not this. We have not. Doesn’t exist.”

“That is also important, that LSD produces no addiction.”