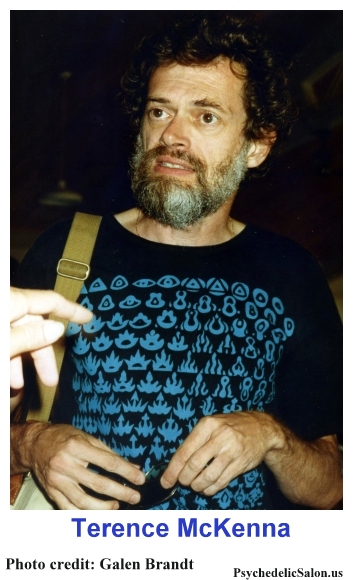 “It seemed probable to me that this phenomenon encountered in deep psychedelic experiences with psilocybin actually has a potential historical impact. It is a kind of human ability, which is at present submerged in the psyche, contactable only by the shamanic means of journeying into historical hyperspace. In other words, of going into that place where the adumbrations of the future are intense enough that you can have an intimation, at least, of what is to come.”

“I think the gradual evolution of language is actually the gradual lifting of the veil that is imposed between ourselves and meaning by the planetary ecology. In other words, the forward thrust of history is actually regulated by the ecology, and it is regulated through control of the evolution of language. Because what you cannot think you cannot do, and where you cannot imagine you cannot steer your culture and go. So I’m proposing on one level that hallucinogens be thought of as social pheromones that regulate the rate at which language develops and therefore regulates the evolution of human culture generally.”

“Tribalism is a social form which can exist at any level of technology. It’s a complete illusion to associate it with low levels of technology. It is probably, in fact, a form of social organization second only to the family in its ability to endure.”

“Knowledge, or verbal facility, is no proof that you know what you’re talking about.”

Consciousness, Healing, and Social Justice
The Women’s Visionary Congress (WVC) is an annual gathering of visionary women healers, scholars, activists and artists who study consciousness and altered states. The WVC supports the transfer of knowledge among women who apply the insights of their research and spiritual path. We gather on beautiful land in Northern California to renew our community of adventurers and visionaries.

The fifth annual WVC will take place from July 29 – 31, 2011 at the Institute of Noetic Sciences (IONS) Earthrise Retreat Center, near Petaluma, California. The WVC welcomes interested women and men to join us as we talk, dance, eat delicious food and participate in a series of conversations with wise women.