The Brotherhood of the Screaming Abyss! 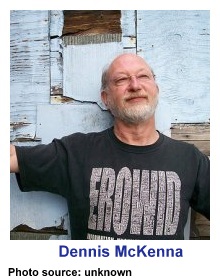 [NOTE: All quotations are by Dennis McKenna.]

“The brain is essentially a communications network … all this complex network of neurons that cross-talk to each other through these neurotransmitters.”

“We think of ourselves as separate from the environment. We’re kind of here, and our skin separates us from the environment, but we’re not like that at all. We’re semi-permeable membranes. Things are coming in all the time in the form of food, drugs, smoke, other things that we absorb, and we’re putting out things all the time at the same time. So we’re part of this chemical communication system.”

“If it weren’t for the linkage to symbols, or significance, which are abstractions, we wouldn’t be conscious. That is the sine qua non of consciousness, is that we’re immersed in this world of ideas and abstractions, and dreams. And this kind of experience is as real as the external world for us. And not really separated from us. That’s what sets us apart from animals.”

“It’s not only up to us. Life probably permeates the universe, and that means intelligence permeates the universe. And that’s good. So if we blow it, and it looks like we’re probably going to, others will carry on. And if we wake up in time maybe we can be part of that. Our challenge is to propagate these understandings through enough people that people do wake up and they realize that we’ve got to get cracking.”

“Ayahuasca is now a global phenomenon, and this is part of the plants’ reaching out, trying to reach out to larger groups of people and basically hit us upside the head with a two by four and say, “Hey you monkeys wake up! You’re fucking it up! You have to wake up.”

“Religions, established religions tend to want you to take a lot of things on faith for which there’s not a shred of evidence. And so the doctrines and the dogmas become essentially political institutions, they become instruments for keeping people in line, don’t ask too many questions, just accept it.”

“One of the maybe adverse side effects of psychedelics is that they’ll make you think you’re the messiah, or you somehow have to play a role in this.”

“I think ayahuasca is perfectly capable of finding the people it needs, and the people who need to find ayahuasca will find it. And there’s no need for cults or movements or very much human intervention, although a lot of people will be convinced that we must do this.”