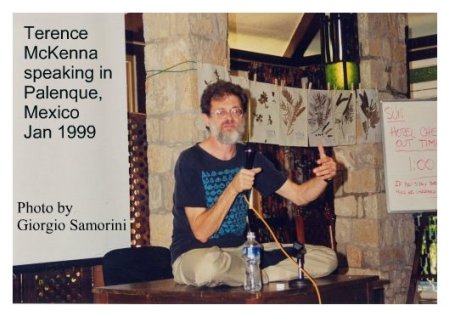 “The human imagination, in conjunction with technology, has become a force so potent that it really can no longer be unleashed on the surface of the planet with safety.” [COMMENT by Lorenzo: This statement was made before Terence discovered virtual reality in cyberspace.]

“This is where I think the psychedelics come in because they are anticipations of the future. They seem to channel information that is not strictly governed by the laws of normal causality. So that there really is a prophetic dimension, a glimpse of the potential of the far centuries of the future through these compounds.”

“This is the nature of going forward into being: A series of self-transforming ascents of level.”

“I believe that the place to search for extraterrestrials is in the psychic dimension.”

“It seems to me far more likely that an advanced civilization would communicate inter dimensionally and telepathically.”

“There is an angel within the monkey struggling to get free, and this is what the historical crisis is all about.”

“It’s possible to see the whole human growth movement of the 1970s as a wish to continue the inward quest without having to put yourself on the line in the way you had to when you took 250 gamma of LSD. And I think all these other methods are efficacious, but I think it’s the sheer power of the hallucinogens that puts people off.”

“I think that being imposes some kind of obligation to find out what’s going on.”

“The movement of a single atom from one known position to another known position changes an experience from nothing to overwhelming. This means that mind and matter at the quantum mechanical level are all spun together.”

“I think there’s a shamanic temperament, which is a person who craves knowledge, knowledge in the Greek sense of gnosis. In other words, knowledge not of the sort where you subscribe to Scientific American, and it validates what you believe, but cosmologies constructed out of immediate experiences that are found to be always applicable.”

“The leading edge of reality is mind, and mind is the primary substratum of being.”

“Certainly the central Platonic idea, which is the idea of the ideas, these archetypal forms which stand outside of time is one which is confirmed by the psychedelic experience.”

“ Certainly neoPlatonism, Plotinus and Porphyry and that school are psychedelic philosophers. Their idea of an ascending hierarchy of more and more rarefied states is a sophisticated presentation of the shamanic cosmology, which is the cosmology that one experientially discovers when they involve themselves with psychedelics.”

“The shaman has access to a superhuman dimension and a superhuman condition, and by being able to do that he affirms the potential for transcendence in all people. He is an exemplar, if you will.”

“Skywalker is a direct translation of the word shaman out of the Tungusic, which is where Siberian shamanism comes from. So these heroes that are being instilled in the heart of the culture are shamanic heroes. They control a force which is bigger than everybody and holds the galaxy together.”

“I connect the psychedelic dimension to the dimension of inspiration and dream.”

“We have changed. We are no longer, as I said, bipedal monkeys. We are instead a kind of cybernetic coral reef of organic components and inorganic technological components.”