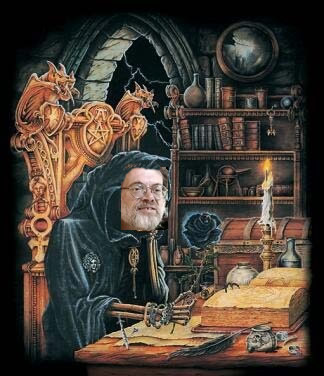 [NOTE: All quotations are by Terence McKenna … recorded in 1996, however, it is current enough to have been given just last night … maybe it was :-).]

“And these angel-dealing, horoscope-casting, alchemy-pursuing visionaries of this Rosicrucian Renaissance became simply objects of historical curiosity, completely incomprehensible to the people who followed them, generation after generation after generation, until, I submit to you, the present. And in the present moment we, like they, inherit a world whose ideologies are exhausted and can only be refreshed from the margins.”

“In our own time, through integrative sciences like ecology and animal behavior and psychology we have re-understood what was forgotten during the reduction centuries of modern science. We’ve re-understood that the world is one thing, and it’s a living thing. It’s a thing with an intent and a spirit within it, and this is the key concept [of alchemy].”

“I think the entire message of the psychedelic experience, which is basically the sine qua non of the rebirth of alchemical understanding, the very basis of that understanding is that nature seeks to communicate.”

“Shamanism is essentially a living tradition of alchemy that is not seeking the stone but has found the stone.”

“Within the context of the alchemical vocabulary, the psychedelic experience, as brought to us through plants long in the possession of Aboriginal people, appears to be the identical phenomena [as alchemy].”

“All of you who have been through high dose psychedelic experiences know that it’s very hard to carry stupid baggage through that keyhole. In fact you’re lucky if you just get your soul and yourselves through and intact.”

“The psychedelics have brought us back to this alchemical mystery, shorn of any vocabulary for dealing with it, shorn of any real living notion of the spirit.”

“Shamanism and alchemy are a seamless enterprise.”

“If you look around you, the entire global civilization is undergoing some kind of meltdown. The planet itself is now to be seen as a kind of alchemical retort. The prima materia to be transformed are the nuclear stockpiles, the toxic waste dumps, the industrial wastelands, the populations devoid of hope, the populations in threat of infectious and fatal epidemic disease. There is a great deal of prima materia to be worked on at the historical level of the alchemical process.”

“In the 60’s, we thought that all that had to happen was that everybody would take LSD and the obvious right things to do would be done. And we expected no opposition to this because its rightness was so obvious. We didn’t realize that every righteous crusade in history has marched into the waiting jaws of its oppressors. But the spirit doesn’t die.”

“In the 60’s then, LSD was not sufficient, even coupled with rock and roll it only brought repression [oppression?]. It was like a failed alchemy. Instead of the dissolving and recrystallizing at a higher and more angelic level thousands of prisons were built, and the entire thing failed. But this spirit is THE spirit, the spirit of life itself, the spirit of novelty itself, and it will not be suppressed for long in any time or place. So now again it comes. … It’s a spirit of dissent that says we will not serve the values of materialism, the values of the ego, and the values that separate and break down the community. So here it is again.”

“We are not an army. So our strategy must be stealth. It’s an alchemical strategy, and what do I mean by stealth? I mean the house of constipated reason must be infiltrated by art, by dreamers, by vision. And what is new is that there are massive technologies available to us, not available in the 60’s. They were not designed for us. They were not intended for us. It was never ever thought that such power should flow into the hands of freaks such as ourselves. Never-the-less, through the perverse nature of the unfolding of the world, we have such tools. And I’m referring, as you probably anticipate, to the World Wide Web and the Internet.”

“Well now you can find the others, you don’t have to stick a flower in your hair and go to San Francisco. You just go to the Web. Find the others. We all need to create affinity groups which are subsets of the much larger community that we’re part of. And then, using this technology, which was designed to keep track of us, to pick our pockets, and to sell us junk we don’t want, use this technology to produce art, massive amounts of subversive art, and ALL art is subversive, I’m not calling for an ideological agenda. All truth that springs from the individual is subversive, because culture is not your friend.”

“My brother, years ago, invented this term. He called it extra-environmental. He said, ‘This is what we want to be. We don’t want to be Americans, or Germans, or English. We want to be extra-environmentalists. Always feel wherever you go that you are a stranger, the outsider, the one looking in. This is the viewpoint that makes all places the same to you.’ “

“I think transcending our cultures is going to be extraordinarily necessary for our survival. I don’t think we can carry our cultures through the keyhole of the stretch of the next millennium”

“This is what you are, you are some kind of a mystery suspended between two eternities. And in that moment, when a mind looks out at a world and asks the question, ‘What is it?’ In that moment art can be created. And it is the only form of immortality that I have any certainty of, and it’s available to everyone.”

“A great turning point is in the offing. The world is changing. It’s changed before, but not for a long time in our lives, not since before our lives. But now it’s changing, and there are many many possibilities.”

“Launch your meme boldly and see if it will replicate.”

“Part of what is wrong with our society, and hence with ourselves, is that we consume images, we don’t produce them. We need to produce, not consume, media.”

“Inevitably out of the psychedelic experience emerges not despair, not self-indulgence, but wild-eyed idealism, that’s the inevitable product of any psychedelically driven social process.”

“If you take psychedelics and the Internet and music and put all of that together you have the basis for a new community that is wider and deeper than you know. The people who are building the new machines, who are designing the new circuitry, who are writing the new code are ALL freaks. They work for capitalist dogs, of course, because we all do, but the creative thrust of these technologies is being driven by people just like you and me.”