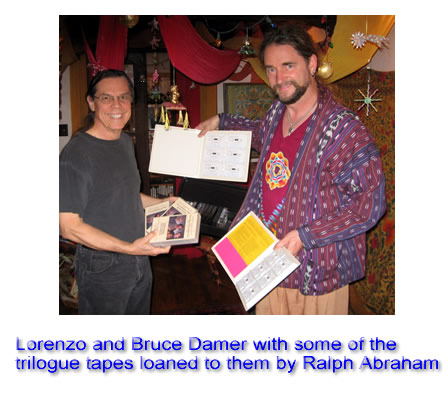 “I think that creativity depends on having sufficient indeterminacy around for a new pattern to arise up within it.” –Rupert Sheldrake

When asked if he believed in randomness, Terence quickly said, “No,” and then he went on to say, “Randomness is the least likely thing. Nowhere in nature do you encounter it.”

“If there is no randomness in the universe, then what do we mean by chaos?” -Rupert Sheldrake

“Not thinking about the World Soul but the individual soul, that the seizure of DMT is almost like a simulacrum of death itself, and that you seem to see into an ecology of souls.” –Terence McKenna

“The World Soul, I think, is in communication with us in the culminating moment of human history. This is all being scripted for a purpose and toward an end unglimpsed by us but tied up with the survival of everything.” -Terence McKenna

“Tourism is a kind of secularized form of pilgrimage.” -Rupert Sheldrake

“At the root of many problems is the denial of the problem and the fact that we maintain unconsciousness of the problem.” –Ralph Abraham

“I hold monotheism responsible for the mess that we’re in from Abraham right on down to the present moment. I think it is the metaphor which is responsible for the dominator break-out, and that until we get a more polytheistic, nature-oriented conception of reality we will be pretty much under the gun.” -Terence McKenna

“For my money, monotheism is the single most reactionary force in all of human history. I don’t even know what is running second.” -Terence McKenna

“Democracy is a step away from anarchy.” -Terence McKenna

“Perhaps to unify consciousness it isn’t a Western hemisphere goddess we need but simply a recognition of Gaia.” -Terence McKenna