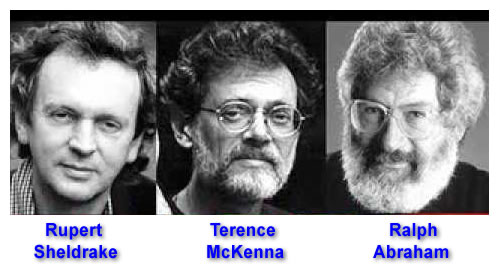 “Who would talk about the evolutionary mind? Who cares about the good and evil in the evolution of species, and so on? This must be interesting only to the degree to which it informs us in this very present moment regarding our choices that we will make in the creation of our future.” -Ralph Abraham

“In a dynamical system, or a massively complex dynamical system such as we live in, when there is a moment of bifurcation, which is the technical mass jargon for “the snap”, that is the only time you get to do anything about the evolution of the system. So according to this self-inflating view, we live at an especially important special moment in history where when we think something or do something it has actually an enormous effect on the future. … What we do has some influence on the creation of the future more than at other times in history.” -Ralph Abraham

“The edge of the millennium, any edge of any of the millennia, is particularly important to those revolutionary souls who want to make a change in things. It is a special time.” -Ralph Abraham

“Salvation is an act of cognitive apprehension.” -Terence McKenna

“This is a moment of enormous opportunity, and those who find themselves in this moment with power, defined however you care to define it, have a moral obligation to act. … What we must become is clear.” -Terence McKenna

“To the degree that we can change our minds we will escape extinction.” -Terence McKenna

“If you charge off with some political agenda that is not informed by clarity you’re going to end up with business as usual. The road to hell is paved with good intentions, but it is not paved with clarity.” -Terence McKenna

“I certainly agree that for me personally, psychedelic experience has enhanced clarity, whereas some people think the opposite.” -Ralph Abraham

“I think that grass root research, based on phenomena that are actually common sense, that are part of everyday life for many people, could help to wake us up, to give a greater clarity about what’s really going on, and make us recognize that there’s far more interconnection between us and other species, and us and other people, than is admitted in the scientific view of things, which is the world view which most people feel they have permission to talk about in public.” -Rupert Sheldrake

“What we’re saying is that we must dissolve the artificial boundaries that confine our perceptions. Someone once said, ‘If we could feel what we are doing to the Earth we would stop immediately.’ . . . So we have compartmentalized our lives, and this allows us to do the fateful and lethal work that is destroying the planet, destroying communities, and so forth.” -Terence McKenna

“Culture is a scheme for maintaining and creating boundaries. It replaces reality with a linguistically supported delusion.” -Terence McKenna

“As long as we believe in mind and matter, rich and poor, living and dead, aboriginal and advanced, black and white, man and woman, then we’re inevitably going to carry on a dualistic analysis of our dilemma, and we’re going to produce incomplete agendas and answers.” -Terence McKenna

“The great evil that has been allowed to flourish in the absence of mathematical understanding is relativism. And what is relativism? It’s the idea that there is no distinction between shit and Shinola. That all ideas are somehow operating on equal footing.” -Terence McKenna

“The enemy that will really subvert the enterprise of building a world based on clarity is the belief that we cannot point out the pernicious forms of idiocy that flourish in our own community.” -Terence McKenna

“Yes, well it is an ambitious enterprise, and fraught with contradiction, but forward, ever forward!” -Terence McKenna