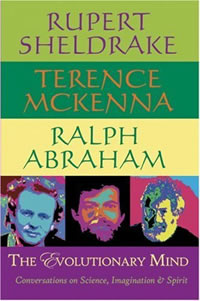 “The development of current brain size is not the reason that there has been this explosion of technical innovation recently. Brain size hasn’t changed much for 100,000 years.” -Rupert Sheldrake

“The domain in which the change [from animal to human] was born, and in which we will live until we leave the body behind us, is the domain of the imagination. And this is what we created that is uniquely human and that has defined us ever since.” -Terence McKenna

“You don’t need to go straight beyond the universe to the divine mind, there’s plenty of lower-level minds than the divine mind that could be out there.” -Rupert Sheldrake

“My notion of the mystical is simply that which remains to be understood, and there will always be a residuum of mystery in principle, but in principle it is not mysterious.” -Terence McKenna [Rupert disagreed with this.]

“The idea that this evolution’s equipped us with minds, and language, and cognitive abilities that enable us to comprehend the entire universe, where it’s come from, where it’s going, what minds and mind may lie beyond what we see, the idea that this very small part of the evolutionary system, with all the limitations inherent in it, could comprehend the whole seems to me a rather improbable supposition.” -Rupert Sheldrake

“It’s not decided what’s going to happen next, there are imaginations of many levels, including human imaginations, at work here, looking at alternative possibilities. New things happen, and then what happens next depends on what’s happened already and the new possibilities of imagination that open up, but without the goal being fixed in advance.” -Rupert Sheldrake

“[Evolution] is a game, one of the rules of which is: The rules can change.” -Terence McKenna

“Time is not a tyranny. It’s a relativistic medium subject to all kinds of plasticity. There are many ways out of any assumed corner we paint ourselves into.” -Terence McKenna