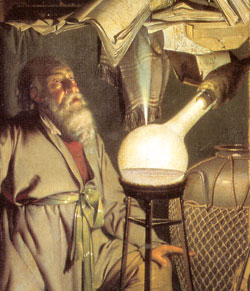 “Human beings are co-partners with deity in the project of being. This is the basis of all magic.”

“In a Christian context magic is heresy because it implies that man can command god to act. In other words that in some strange way the magician compels nature to behave as the magician desires.”

“The Hermetica actually refers to humanity as the brother of god. So it’s a completely different attitude toward being human. It’s an empowering attitude.”

“In the hermetical, magical view human beings are not tainted by Original Sin.”

“Western civilization, in a way, can be thought of as an accumulated series of misunderstandings.”

“Had Western Europe stayed in touch with the mystery religions of ancient Greece, Christianity would never have been able to force its agenda to the degree that it did.”

“Alchemy, and conjuration, and tailsmanic magic, and sympathetic magic, all of these things flourished, really, not as a throwback but as a kind of prelude to modern science. Modern science is an incredibly demonic enterprise.”

“[John] Dee is the last person to be able to unify into one world view science, and mathematics, and magic, and astrology all together.”

“Paracelsus was an interesting guy. He’s essentially the inventor of drugs because he was the first person extract herbs and to get this notion of the essence.”

Today’s podcast begins a newly uncovered lecture by Terence McKenna. His topic is “Hermeticism and Alchemy” and he begins this 1991 workshop in fine form, making statements such as: “Human beings are co-partners with deity in the project of being. This is the basis of all magic.” And, “Western civilization, in a way, can be thought of as an accumulated series of misunderstandings.”